The Scientists get pampered and serenaded on West Avenue 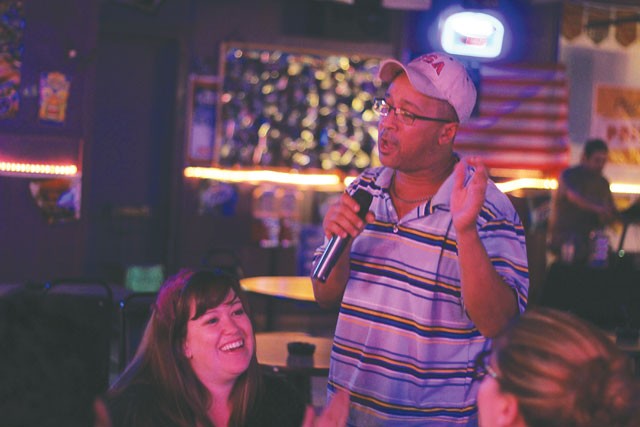 We have to set the record straight: The Hidden Tavern isn’t really that hidden. Yes, it’s a little out of the way for those of us who consider the St. Mary’s Strip to be home base — and it is sort of burrowed into an anonymous, uninviting strip mall — but all in all it’s pretty easy to find. Just look for the massive, pixilated posters of early-’90s yuppies merrily shooting pool pasted on the windows. Or if that’s too subtle, check out the giant, unblinking “HIDDEN TAVERN” sign towering over West Avenue.

We weren’t exactly sure what kind of situation we’d be stepping into at 10:50 on a Sunday night, but the lure of karaoke, $2.50 Smirnoff, and $2 Bud bottles — plus the bragging rights of having unearthed the legend of the Hiddennnn Tavernnnn* — was enough to justify Monday morning grogginess.

Inside, Hidden Tavern proved more spacious than expected, and not much to look at. The walls and ceilings are covered with tacky vinyl wall hangings, streamers, and posters — like a Party City threw up in a dive bar. And yet for a Sunday night Hidden Tavern was pretty jumping, with almost no room at the lengthy, well-stocked bar to order. We secured a round of flavored Smirnoffs and soda (Dr. Adams heartily endorsed the orange flavor while I mostly stuck to the regular variety) and wandered around a little.

The room with the three pool tables was reminiscent of a “Taco Bell from 1992,” according to Dr. Gonzalez. Maybe things were a little too clean: When attempting to head to the bar, Dr. Adams and Dr. Ellington’s table skidded a few feet on the slick floor, causing a full beer bottle to fall and shatter. The bartender graciously offered up a replacement, at no charge.

Karaoke with Oz, our Stevie Ray Vaughan-appreciating host, was in full swing. Onstage, a woman in a tight dress perched herself on a bar stool to sing Lisa Loeb’s “Stay (I Missed You),” flashing us in the process (insert “hidden tavern” joke here). Then a man with what I would describe as the world’s tiniest, softest voice — think Piglet from Winnie-the-Pooh — sang Muse’s “Time is Running Out.” But hey, at least there was no Nickelback (yet).

Oz called up another karaoke performer, but the stage was empty as “Neither One of Us” by Gladys Knight and the Pips cranked up. However, a voice rang out loud and clear — from the table directly next to us. Taking advantage of the wireless microphone, John Burwell did his entire performance roaming around the audience, chasing after the bartenders and passionately serenading a giggling Dr. Shaver. It was probably the best karaoke performance I’ve ever seen. When Burwell was finished, the entire bar erupted into applause and whistles as Oz deadpanned, “Your cordless mic privileges are revoked.”

Burwell didn’t get called up to sing again while we were there, but many regulars made repeat trips up to the stage (including one of the bartenders). Oz seemed to favor friends and regulars — Dr. Garza waited about an hour and a half to belt out “Me and Mr. Jones” (RIP AW). It’s no secret that we Scientists are karaoke junkies, and we were a tad put off by Oz’s seeming reluctance to newcomers.

But maybe that’s a sign that we should drop into Hidden Tavern more regularly. Initially, we mistook low-key for low-rent — but the Tavern won us over with its chill vibe, friendly barstaff, and steady soundtrack of some amazing local singers (and a few hilarious ones). Definitely worth leaving our comfort zone and going into hiding for the night. •

*Read in your best Olmec from Legends of the Hidden Temple voice.

Vibe Tacky, but friendly — it’s not a “place to be seen,” but a good place to get heard on the karaoke stage and to relax with good friends.

Best Use Check out karaoke on Tuesday and Friday-Sunday, and be sure to put your name in with the host early.