During her decade-long career, three-time Academy Award nominated actress Saoirse Ronan has been a champion of independent cinema. While some of those films have reached incredible heights like Brooklyn, Lady Bird and The Grand Budapest Hotel, Ronan has hit a small rough patch with her last two less-than-stellar outings – On Chesil Beach and her most recent, The Seagull.

Adapted from a late 19th-century play of the same name by Russian playwright Anton Chekhov, The Seagull is a narrative that is probably fine as a stage production, but when put on film feels inelegant and amateurish. Many of the film’s problems lie at the feet of director Michael Mayer (Flicka), whose career successes have come mostly from his work on Broadway, where he won a Tony Award for the musical adaptation of 2006’s Spring Awakening. Sadly, Mayer is unable to create much of a pace or focus during what is, thankfully, a fleeting 98-minute stopover with a cast of particularly grating characters.

Set in a country estate not far from Moscow, the film stars Ronan as Nina, a love-struck young woman who lives nearby and comes for frequent visits to see Konstantin (Billy Howle), an aspiring playwright who views the modern theater as “trite and riddled with clichés.” He lives there with his uncle Sorin (Brian Dennehy) and the estate’s manager Ilya (Glenn Fleshler), his unhappy wife Polina (Mare Winningham) and their even unhappier, vodka-drinking daughter Masha (Elisabeth Moss), who is also in love with Konstantin. 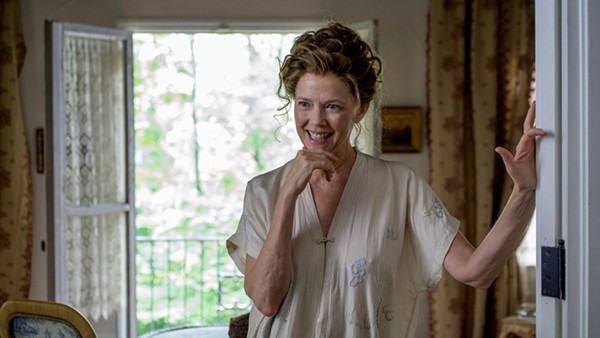 Family dynamics are thrown into disarray when Sorin’s sister and Konstantin’s mother Irina (Annette Bening), an aging stage actress, comes for a visit after learning that Sorin has fallen ill. In tow with Irina is her lover Boris (Corey Stoll), a celebrated writer Konstantin grows jealous of, and who begins to get closer to the impressionable Nina as she hurls compliments his way.

If all those elements sound like a classic setup for a melodramatic tragicomedy — where all the characters mope around wishing that somebody who didn’t love them loved them and complaining about the misfortune of making art — then The Seagull has found its audience. For others, The Seagull is a pity party that can’t be salvaged by the couple of scenes where Bening’s Irina, who is disappointed in her son for wasting his time making pretentious plays, is able to really show off her character’s cruel and critical nature.

Aside from Bening — and a few of Masha’s one-liners (“I’m in mourning, for my life,” she says when asked why she always wears black) — there’s not much that makes The Seagull notable. It’s a film about tiresome characters telling tiresome stories. Everything else is lost between all the pouting.