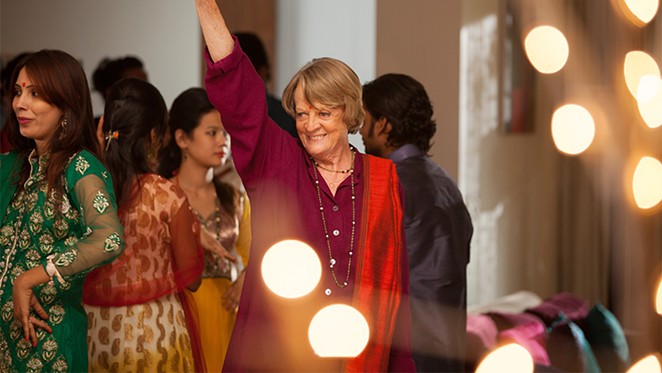 Set in Jaipur, India, Second Best follows up with the first film’s beloved group of retirees. This time they’re less concerned with culture shock and more invested in adventure, love and philosophical questions. Still popular with a myriad of loyal ex-pat retirees, Sonny (Dev Patel) thinks his business plan is primed for success and after the building’s renovation he sets sights on a new location. With the guidance of Muriel (the always fab Maggie Smith), Sonny realizes a new hotel can be more than just a dream.


Just like its predecessor, Second Best relies on the strength of its cast and multiple plot lines. Muriel grapples with an unexplained health issue. Guy (Richard Gere) finds unexpected love and deals with an incorrigible Sonny. Douglas (Bill Nighy) is a father and recently separated husband with newfound lust for life thanks to Evelyn (Judi Dench). It doesn’t really matter that so many story lines cross through Second Best because the ensemble is cohesive. A cast that includes Smith, Gere, Nighy and Dench is supposed to click — the actors clearly enjoy working together and their chemistry shows on screen.

Hollywood films rarely feature older characters in leading roles and when they do they’re usually pigeonholed as adorable grandparents, lonely widows or grumpy curmudgeons. Thanks to Madden’s direction and Ol Parker’s script, the sequel eschews the stereotype. Most of the film’s leading characters are septuagenarians, sexually active and looking for more — not wallowing in self pity or effusing trite advice to disinterested grandchildren. With a few exceptions, most of the characters are true to life, contradictory and multidimensional. When Norman (Ronald Pickup) suspects his girlfriend of infidelity the scene lacks any melodrama. Firmly grounded, the couple discusses their emotional connection and their mutual disinterest in monogamy. The scene is simple yet uncharacteristic of films with budgets and expectations as high as Second Best. It may be common sense to depict complicated human interactions but it hasn’t been Hollywood’s modus operandi in recent years and Second Best offers a refreshing change of pace.

Although you might not identify with the film’s target audience, Second Best poses difficult questions with humor and aplomb. How will we live our lives with purpose? How do we die with dignity? When Muriel writes her final letter to Sonny, her recommendations make sense for anyone, regardless of age. “Death isn’t an ending,” Muriel writes. “It’s just a time to leave an ongoing story.”