The Skin I Live In (La piel que habito) 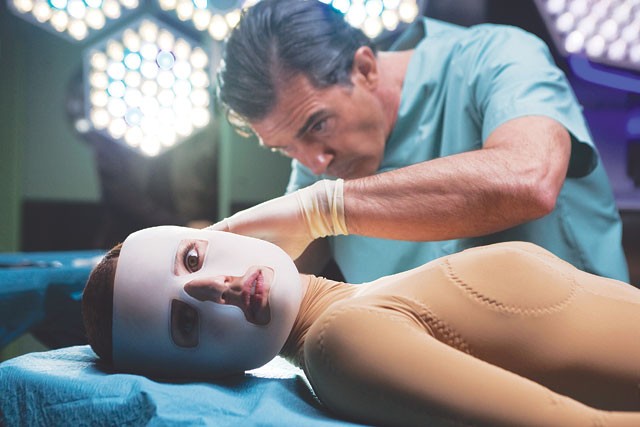 "At age 50," wrote George Orwell, "every man has the face he deserves." But what if a man — or woman — of any age is forced to undergo plastic surgery? If our bodies are ourselves, is organ transplantation an act of identity theft?

When Dr. Robert Ledgard (Banderas) admits to the president of a scientific institute that he has been experimenting with transgenesis, by bonding human and porcine genes, the official is appalled. "The bioethics are clear," he says and orders Ledgard to discontinue his research immediately. The rogue surgeon of course ignores the order and the ethics. Locked in a room on his posh estate outside Toledo, Spain, is a woman whom Ledgard has provided with the most beautiful skin in the world and breasts that he likens to drops of water on glass. To explain how Vera (Elena Anaya) got there and got to look as gorgeous as she does, director Pedro Almodóvar flashes back six years to a convoluted tale of disfigurement, suicide, rape, and abduction.

Since The Skin I Live In is a hybrid of horror and thriller, it would not do to provide too much of the skinny of its sinuous plot. Though the mechanics of flashing backward and forward is a bit clunky, it is impossible to turn away from the film's artfully photographed scenes, however creepy, or resist the spell of Alberto Iglesias's brilliantly paced musical score. Though Almodóvar developed many of his most famous films, including Women on the Verge of a Nervous Breakdown, All About My Mother, and Volver, from original screenplays of his own, he credits this one to the 1984 French novel Mygale by Thierry Jonquet. However, behind both film and novel is Georges Franju's Eyes Without a Face, a 1960 thriller about a master plastic surgeon who, crazed by love, plays God with others' bodies. Whereas Franju is classically direct and efficient in telling his grisly tale, Almodóvar flaunts his baroque flourishes. It is no surprise that the flamboyant Spanish director loves to surprise with eerie excess, including a hint of Stockholm syndrome with erotic complications and a murderous mother with two batty sons. However, the true progenitor of Antonio Banderas's earnest mad scientist is Mary Shelley's Victor Frankenstein. Both figures challenge the limits of human invention and control, with disastrous consequences.

The largest organ in the body is the one we most rely on to tell us who we are. Almodóvar's lurid spectacle of cutaneous transformation gets under the skin and stays there.