The Spurs’ Game 1 Fortunes Turned On One Contentious Play

Even big leads against the Golden State Warriors are held together by the most tenuous of threads, prone to an ill turn at any moment. So, too, are ankles, as we were cruelly reminded in San Antonio’s 113-111 loss in Game 1 of the Western Conference Finals.

The Spurs had stormed out to a 76-55 advantage in the third quarter against the one-seeded Warriors. They’d dominated the paint and consistently closed out on their opponent’s fleet of elite shooters, while their own superstar forward appeared to have bounced back from the ankle sprain that had held him out of their Game 6 win over the Rockets.

That’s when Kawhi Leonard elevated for a three-point attempt from the corner, coming down on the outstretched foot of Warriors center Zaza Pachulia. Leonard had already given Spurs fans a few scares in the game, only to shake them off and continue playing. This time, he wouldn’t look nearly as spry, clutching his left foot right in front of a worried Spurs bench. He would make his two free throws, giving the Spurs a 23-point lead, and retire to the locker room.

The Warriors, probably the most opportunistic team in NBA history, took full advantage of Leonard’s absence, reeling off 18 straight points in their trademark brand of beautiful chaos. They turned turnovers into layups, offensive rebounds into cocksure three-pointers, and mercilessly seized control of the game.

The Spurs, then without their two best playmakers from the regular season (shoutout to Tony Parker), had no answer. In the 20 minutes following Leonard’s exit, the entire team was outscored by Kevin Durant and Steph Curry. Manu Ginobili and Dejounte Murray provided a few encouraging moments, but the Spurs’ lead eventually wilted and couldn’t be saved by some last-minute Patty Mills heroics.

Leonard’s injury was the center of conversation following the loss – and with good reason. The Spurs forward had been the best player on the floor before getting hurt, leading both teams in points (26) and rebounds (8) before going down. San Antonio had outscored Golden State by 21 points during the 24 minutes he was on the floor, and looked like an entirely different team without him. 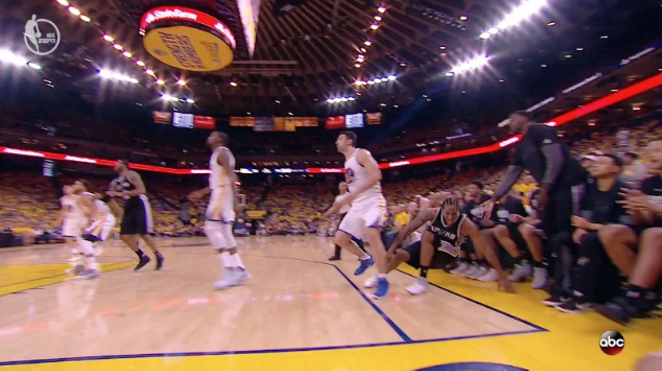 The nature of the play remains under considerable scrutiny. NBA rules protect the shooter’s right to land unmolested for the very reason we saw last night. Pachulia has also historically toed the line between reckless and gratuitously physical, compiling a reel of dubious plays against the Spurs from when he played for the Mavericks. The fallout leaves passionate fans on both sides entering a murky arena that blends optics and intent – familiar ground for anyone who’s attempted to dissect the antics of another controversial Warriors player, Draymond Green.

Either way, last night is a gut punch for the Spurs, who were well on their way to stealing a game on the road and seizing a 1-0 series lead against a massively favored opponent. We’ll have a better understanding of the extent of the injury after he undergoes an MRI later today, but few expect him to be in uniform for Game 2. Given the way they played without Leonard to close the game, the smart money is on the Spurs returning to San Antonio in an 0-2 hole.

For what it’s worth, Leonard didn’t think there was any ill intent behind what Pachulia did: "Did he step under it? Like, on purpose? No,” he said. “He was contesting the shot. Shot clock was coming down. I’ll have to see the play."

Game 2 tips off Tuesday in Oakland at 8pm Central Time.