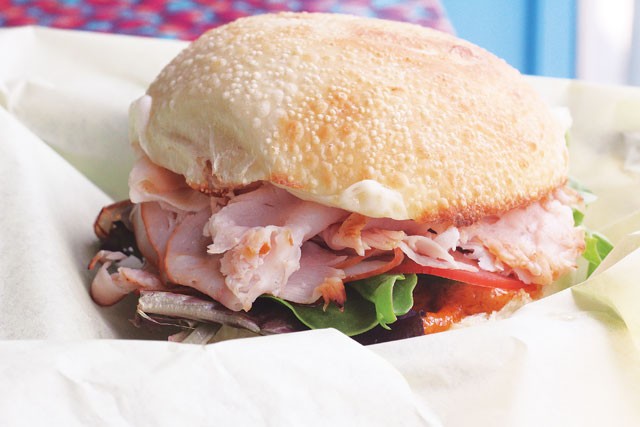 An unlikely bastion of rave reviews, The Filling Station, an old converted gas station, served sandwiches, pies, and salads out of just 400 square feet. Over time, steady business turned into droves — yet the space remained the same. The standing-room-only customer side was actually larger than the kitchen behind.

“We just learned to live with it and had the light at the end of a tunnel of moving to a bigger space,” said owner and operator Jon Rowe. “In the beginning it wasn’t a big deal but as we got much busier it was hard on everybody.”

You can still expect a line at lunchtime, but now it stretches comfortably through the air-conditioned dining area. Whereas before customers had to grab and go, now the people-watching is paramount: elegant ladies, dating teens, K9 unit police, and a prominent Southtown gallerist all lunched side by side on a recent weekday. And a peek behind the curtain reveals a richly deserved workspace. Most importantly, the food is as great, or possibly better than ever.

How this tiny sandwich shop made good is that old formula of top-quality, reasonable prices, and top-down leadership. On any given day you can find owners Jon and Stacie breaking a sweat to keep up with the crowds.

“I grew up in the restaurant business in Portland, Oregon, and every restaurant that I worked at was independently owned. We made all our food from scratch,” Jon said. “So that’s the only thing I’ve ever known, and like.”

The entire concept is a labor of love, as every item is made in-house. I keep coming back to the habanero turkey sandwich for its incredible heat and flavor. More spicy than creamy, the sauce focuses on the soft burn of the bright orange peppers. But my current obsession is the veggie sandwich, lined with hummus, squash, and tomatoes, topped off with that magic elixir.

Bread is baked throughout the day, a 45-minute process start to finish. The cashier, the busser — everyone here knows how to bake bread. When The Station makes it look this easy, you begin to wonder why every restaurant in town isn’t keeping up.

The desserts are all concocted by Jon’s wife, Stacie. The coconut cream pie is a cult favorite, and after much brow knitting, the couple released the recipe to the local daily newspaper. “We’d been asked for it so many times, we finally agreed,” Jon said. “All it did was make more people come in for the pie. When they read the recipe, they realized there are a lot of steps.”

In the new space, bright pastel walls are covered with art curated by Southtown dandy Justin Parr. Glazed earthen floors, painted with bright white suns, are a delightful folky touch that brings a homey vibe to the former office space.

For both new and old fans of the Filling Station, all will be revealed at the upcoming grand opening on Saturday, August 27. Come out for free food, drinks, and music and welcome the Café into its new home. •

The Skinny
Everything is made from scratch at this Southtown gem, which recently moved into much larger digs next door.