The strange tale of Midget Mansion 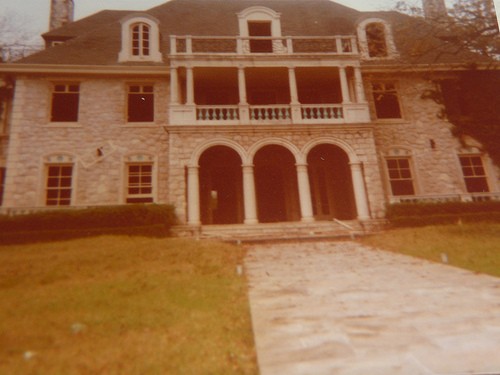 Readers of my blog are aware that I am fond of pointing out that San Antonio is one of those places that seems to beget a bounty of weird urban legends. One of the most whimsical and macabre tales involves an estate that had the colorful name of Midget Mansion (also known as Gillespie Mansion). So named because it was apparently constructed with low-hanging fixtures and low ceilings, the tenants were reputed to be a family of little people. Specifically, the patriarch and his wife, though the residence was evidently also inhabited by their normal-sized children and also some servants.

The father is said to have been a successful businessman during the 1920s who had the home tailored to his unique specifications. For many years neighbors would curiously observe the habitation and its novel tenants. Then events took a tragic turn one day when the father allegedly went mad, murdering his entire family and then himself for reasons unknown (at least according to the story). The mansion understandably remained abandoned for the decades that followed and ultimately fell to ruins. Rumors of shadowy figures and disembodied noises emanating from the location were prevalent for years, leading to a foregone conclusion that the place was haunted by the spirits of the victims.

Eventually the abandoned property off Medical Drive on the Northwest side of town became a hotspot for teenaged thrillseekers and perhaps even diabolical cult activities that involved satanic rituals and animal sacrifices. Vandalism and a fire ultimately took their toll and the mansion was demolished. As with most urban myths, there are distinct variations in the story. For example, in one version the home had also been the site of a suicide by the daughter of the original owner. In another, the tiny tenants were said to despise normal-sized people and consequently to mistreat their servants. The location (near the Medical Center) where Midget Mansion once stood is, now the site of some luxury condominiums. — Ken Gerhard