The Texas Biennial lands in San Antonio with a program exploring race, immigration and activism

Once upon a time, the term “biennial” applied to the arts elicited one thing only: La Biennale di Venezia, a twice-annual exhibition inaugurated in 1895.
Over the course of its 126-year history, that iconic institution grew into an expansive international affair that birthed its own discipline-focused spinoffs, including the Venice International Film Festival. It also inspired adaptations across the globe — from New York’s Whitney Biennial, founded in 1932, to Korea’s Gwangju Biennale, founded in 1995.

In 2005, Austin artists Rachel Koper, Jon Lawrence, Shea Little, Arturo Palacios, Joseph Phillips and Jana Swec launched the Texas Biennial to showcase artists living and working in the Lone Star State. After three outings, the Texas Biennial merged with Austin nonprofit Big Medium in 2011 and stretched beyond the capital — first to San Antonio and Houston, then to Dallas and Marfa. As its geographic and curatorial scope expanded, its format became unpredictable and unclear, resulting in confusion and even disinterest. Further muddying the waters, the Texas Biennial took a gap year in 2015 — only to reemerge in 2017 with a statewide survey hosted in a head-scratcher of a venue: the KC Grey Home Furniture warehouse in Southeast Austin.

As peculiar and disorienting as it looked upon arrival, that location represented a calculated risk taken by curator Leslie Moody Castro.

“I wanted that space for a lot of reasons,” Moody Castro told the Current in 2019. “I was really fighting [the idea of] being in a clean white cube. It was immediately [after Trump’s election] … and I was seeing the anger about the new president … the race issues really bubbling to the surface and people saying, ‘The white cube is not working for us because we do not identify with those things.’”

In the end, the whole thing worked in an odd but memorable way — once you got past the overstuffed recliners in the lobby.

To state the obvious, the world has changed in overwhelming ways since the Texas Biennial’s last installment. Originally slated to open in the fall of 2020, its next chapter was placed in the able hands of Houston-born co-curators Ryan N. Dennis and Evan Garza.

“The past iterations of the Texas Biennial have focused exclusively on artists living and working in Texas,” Garza pointed out. “That was the first aspect we wanted to change. The real origin point for me and Ryan was that — before we got started selecting artists and doing studio visits — we had a conversation about expanding the parameters for artists. That’s partly because Ryan and I are both from Houston, which is an incredibly international city. A lot of the larger cities in Texas are extremely diverse in their makeup — and everything that happens in Texas has a kind of global impact. And so it made sense for us to organize the project in a way that spoke to that diversity but then also spoke to the countless points of entry into a conversation about Texas. [So] we expanded our artist parameters to include Texas natives living and working anywhere in the world and also international artists for whom Texas and its history have been a subject matter for some time.”

Beyond the hurdles presented by the pandemic — which shifted studio visits to a virtual format — both Dennis and Garza moved out of state shortly after their appointments as co-curators. Dennis landed in Jackson, Mississippi, and Garza landied in Washington, D.C. With support from Presa House Gallery co-director Rigoberto Luna, Big Medium curator and programming director Coka Treviño and Texas Biennial co-founder Shea Little, the duo organized the exhibition remotely. After selecting from some 850 open-call applicants, Dennis and Garza extended invitations to roughly 25 they felt complemented the program.

The result is “A New Landscape, A Possible Horizon,” an ambitious project uniting 51 artists and five institutions. Although “intentionally broad in its scope,” the 2021 Texas Biennial centers on timely concerns such as racial and social justice, immigration and border issues, not to mention the increasingly pervasive intersections of art and activism. In hopes of unpacking the various components of “A New Landscape, A Possible Horizon,” we spoke to Garza as he and Luna mapped things out in a still-empty gallery on the second floor of the San Antonio Museum of Art. How did you and Ryan decide to split the Texas Biennial between Houston and San Antonio?

We didn’t. When we realized that it didn’t make any public health sense to squeeze everyone into one warehouse because of COVID, we immediately started reaching out to possible museum partners to host exhibitions that would make up a larger, sort of iterative choreography of exhibitions and programs. So, we actually didn’t decide to seek out San Antonio or Houston — or Marfa or El Paso. We really cast a wide net, and these were the institutions that came back and said, “We would love to work with you.” And we just had the most support among San Antonio museums. That may have had to do with the nature of our project; it may have also had to do with the nature of their exhibition calendars.

How did you go about distributing work between the museums?

We knew that the presentation at Ruby City would be sculptural. … And then we took a look at our available spaces at SAMA and the McNay and essentially tried to make the most concise presentation of work where artists could really be in conversation with one another.

If Ruby City is sculptural, is there anything that designates the other components? And how are the San Antonio artists distributed?

The answer is no. There’s a purely interdisciplinary conversation happening at SAMA and the McNay. And there’s a pretty even distribution of San Antonio artists. … But in terms of trying to break down what’s happening at each venue, we have two Black women at Artpace: Kaneem Smith and Alisha B. Wormsley. Kaneem works in site-specific installation and Alisha’s work is more conceptual, with a community engagement aspect. The presentation at Ruby City is focused primarily on issues of race — the legacy of racism and racial prejudice. At SAMA, there are myriad points of entry into the conversation. … In terms of thematic connections, I would say that the conversations at the McNay and SAMA are actually quite broad and inclusive.

Are there any “wow moments” we can mention?

As the curator, I’m not allowed to have favorites. I guess what I would say to that point is that in order to get the full picture, you really need to see all five venues. They are five distinct conversations with five distinct groupings of artists. And in each venue, there is a different vantage point into contemporary art practice as it relates to the state of Texas. By and large, the Biennial really centers [around] issues of racial and social justice, issues of border and immigrant justice. In each and every one of our locations, activism is the blood that runs throughout the whole project. … There are really big, important moments at each venue. And that’s on purpose, that is by design. The Texas Biennial’s most compact component takes shape in a two-woman presentation pairing Houston-based Kaneem Smith and Pittsburgh-based Alisha B. Wormsley. While Smith takes over Artpace’s Main Avenue windows with a tapestry that employs burlap coffee bags to comment on colonialism, ethical trade and civil rights, Wormsley presents the latest manifestation of her billboard project There Are Black People in the Future on the building’s exterior. August 5-December 26, Artpace, 445 N. Main Ave., (210) 212-4900, artpace.org.

Spread across four galleries, the McNay’s portion of the Texas Biennial promises a broad discourse with contributions from Irish artist John Gerrard, Rome Prize-winning Austinite Steve Parker and the interdisciplinary collective Filipinx Artists of Houston, among others. Be on the lookout for El Paso-born Artpace alum Adriana Corral’s Latitudes, a multi-language text-based series centered on the Universal Declaration of Human Rights, and a piece created specifically for the Texas Biennial by Donald Moffett, a New York-based San Antonio native whose 1987 anti-Reagan poster He Kills Me factored prominently into the activism of AIDS Coalition to Unleash Power (ACT UP). September 31-January 31, McNay Art Museum, 6000 N. New Braunfels Ave., (210) 824-5368, mcnayart.org. 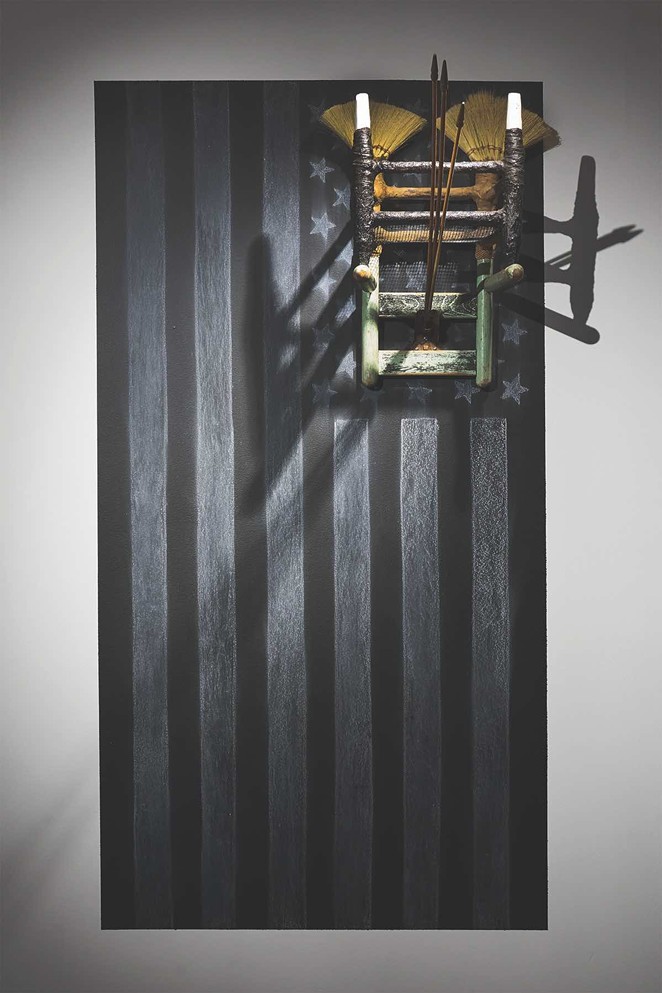 Visually anchored by Houston-based artist Mich Stevenson’s Yellowjacket No. 3 — three glowing cones of canvas dyed with turmeric and suspended from the ceiling — Ruby City’s sculptural arm of the Texas Biennial deftly tackles issues of race and social justice. Of particular interest is Austin-based Ariel René Jackson’s piece The next life of property, which employs chalk, chalkboard paint and a precariously hung chair to address the history of segregated school systems in the United States. August 5-January 30, Studio at Ruby City, 111 Camp St., (210) 227-8400, rubycity.org.