The Trials And Titillations Of R. Kelly, The R&B Lothario 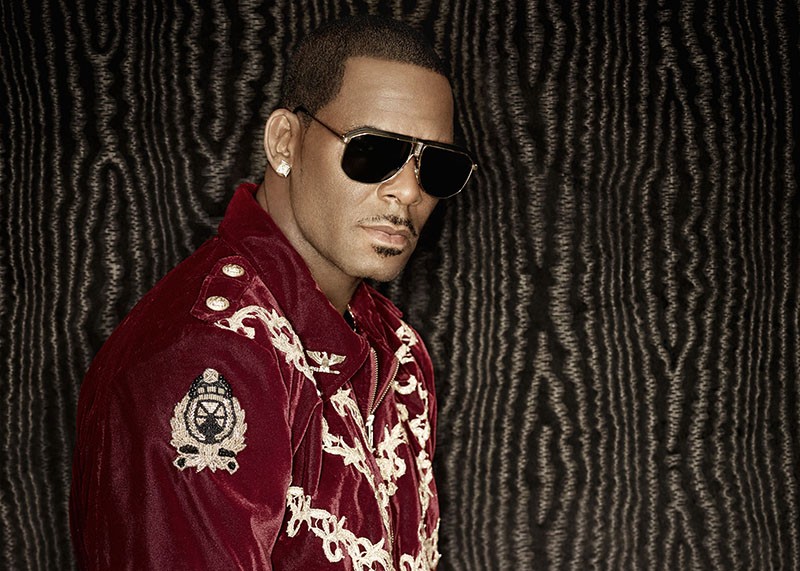 Despite lyrical and legal evidence to the contrary, singer R. Kelly wields a complicated public persona. With song names like "I Like the Crotch on You," an illegal marriage to a famous 15-year-old (Aaliyah) and a sexual assault urination on another (not famous) 15-year-old, perhaps we should let Kelly slide into irrelevance, if not provide a nudge in that direction.

But, like any pop artist with a nine-figure bank account, two parties are keeping the Chicago chanteur afloat in a pool of money a la Scrooge McDuck. The first is Kelly himself, a preternaturally gifted songwriter with a talent for all-time hooks and foolish, but memorable, B-material.

Kelly made his solo debut in '93 with 12 Play, a pun on the three-times-as-smoothness of Kelly's foreplay. The music is delightedly corny, with ubiquitous triangle rhythms, ribbeting bass and a keytar leftover from the '80s. As the years have passed, it's become a touchstone for R&B artists — in 2009, The Dream introduced "Kelly's 12 Play," a song about "doing it to Kelly's 12 Play."

From this platinum starting point, R. Kelly became the most successful R&B artist of the '90s, capitalizing on his new jack swing: a slow-pulsing genre with sing-song rap verses, stadium choruses, lots of intermediary whispering and a devotion to the Roland TR-808. The purest example of the stuff is Aaliyah's debut Age Ain't Nothing but a Number, a slow-burning, baggy-denim album penned almost exclusively by R. Kelly.

This working relationship with Aaliyah ushered in R. Kelly's controversial era, as the 27-year-old became romantically involved with the teen (legal minor) pop star. In August of '94, the pair married outside of Chicago in an illegal marriage. Aaliyah lied by listing her age as 18.

The scandal deepened in 2002, when an alleged sex tape emerged of R. Kelly having sex with and pissing on a 15-year-old girl. Accused of 14 counts of child pornography, Kelly was actually acquitted of all charges in June of 2008.

Despite all this, the public endorsement of R. Kelly continues, replenishing his pool of money when legal fees spring a leak. Part of this is a deep cultural flaw to forgive the defendant and blame the victim, a resolute stain on American culture. Another part is R. Kelly's profound talent — the clarion falsetto and party-sparking hook on "Ignition (Remix)" sounds as fresh as it ever was, even 12 years later.

The final ingredient in Kelly's lasting fame is our obsession with irony, the ubiquitous filter of American life. When R. Kelly delivered the '05 rap opera Trapped in the Closet involving infidelity, HIV scares and a melodic phrase repeated into oblivion, it hit the ironic sweet spot of an artist utterly invested in an absurd and foolish thing. Fans flocked to the low drama, fascinated and repulsed by their attraction to it.

In the mid-aught pastime of getting stoned and marathoning through Trapped lie the roots of contemporary forms of ironic involvement, most of which are passive: binge-watching bad television, live-tweeting, Instagram fame.

The booking visionaries at Fifty Fifty Entertainment have reserved an evening with R. Kelly on Valentine's Day, the romantic equivalent of seeing U2 on St. Patrick's Day or finding Santa on your roof practicing the bars to Run DMC's "Christmas in Hollis." In anticipation, we've prepared the essential love-making jams of Robert Sylvester Kelly.

With an a capella confession of lust, R. Kelly strolls into his first major hit with attitude and a jack swing stomp. "I don't see nothing wrong with a little Bump N' Grind," Kelly repeats ad infinitum, touring the register on the harmless plea.

Spoiler alert: that something is a jeep. This '95 single is basically a vehicle for R. Kelly to explore verbs with shared definitions of auto and sexual action: ride, roll, wax, drive crazy or liquidate in times of financial duress.

In a 2003 New York Times article, Def Jam executive Barry Weiss said R. Kelly had "a little Irving Berlin" in him. If so, "Ignition (Remix)" is Kellz's contribution to the Great American Songbook, right between "If I Were a Bell" and "In a Sentimental Mood."

R. Kelly drops the first verse in this star-studded Bow Wow single, creating an image of himself as a sexual magnet, pulling female club patrons into his orbit. "I'm black, handsome, I sing, plus I'm rich," he sings of his appeal.

R. Kelly and Kelly Rowland team up for the ultimate in ex-sex ballads. "You don't know you're addicted till you relapse," they sing, recalling a late-night soiree.