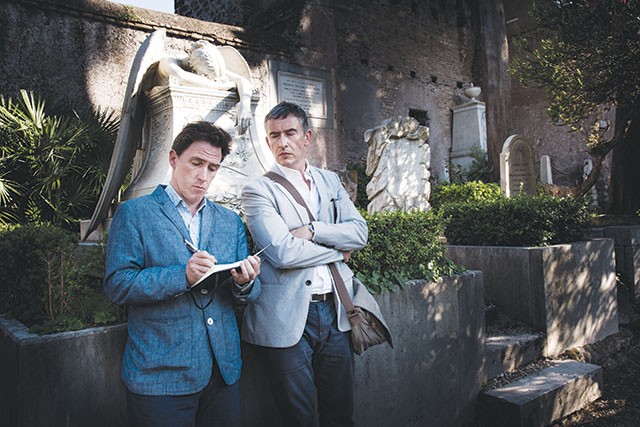 If you weren’t lucky enough to see the 2010 film The Trip (as I was not, but will soon be remedying), starring Steve Coogan and Rob Brydon, here are a few things worth knowing: The Trip is a feature-length cutdown of a BBC miniseries directed by Michael Winterbottom with the cockamamie premise that Coogan would review several British restaurants for The Observer. Though Coogan is a fine writer (Philomena notwithstanding), he’s not a food critic, and that, apparently, made up some of the gags in The Trip—at least if the gags about food writing in The Trip to Italy are any indication.

This time Brydon is the scribe, and he freely admits he knows little about food writing. That’s just as well, because though there are some delightful shots of the meals he and Coogan eat, there’s more time spent taking historical tours, lounging in the sun, and doing spot-on impressions of Hugh Grant and Michael Caine than there is culinary concupiscence.

The Trip to Italy is likewise cut down from a longer TV series. Fortunately, nothing seems to be missing. If there are narrative gaps here, their absence is inconspicuous.

As wonderful as Coogan and Brydon are—more on them in a moment—the real star is the Amalfi Coast. Part of the gig is to spend nights in luxurious boutique hotels, and many of these are on the water or near a picturesque walk up a hillside. It’s a charmed life these guys lead, and they know it, and the beauty of the countryside lends the movie an agreeable breeziness.

In the U.S., Coogan may be most recognized as Octavius from the Night at the Museum franchise, or as Damien Cockburn in Tropic Thunder—you know, the asshole director who gets his head blown off. Brydon has a smaller American footprint, and part of the comedy in The Trip to Italy is an avalanche of jokes about his impending audition for an American mafia movie in which he’ll play a shady accountant.

He and Coogan, both gifted impressionists, trade barbs over Brydon’s audition; because they’re busy working on the piece for The Observer, Brydon puts the audition on tape. Coogan, mildly jealous and operating an iPad camera, accuses Brydon of using too much Pacino in his American accent, and Brydon responds by going full over-the-top Pacino in the manner of Scent of a Woman or Dick Tracy to prove Coogan wrong. (Brydon ultimately gets the part, so perhaps Coogan was wrong.)

Aside from the coastline and the impressions—of which there are many—The Trip to Italy gets at the heart of friendship, particularly the ins and outs of older male friendship. In that way, it’s not unlike the recent Land Ho!, but Coogan and Brydon aren’t on the wrong side of 60, unhappily retired and making amends to each other for past wrongs. They’re laughing it up, having fun with locals and sleeping in luxurious beds. Much like La Grande Bouffe, but without the prostitutes or death by gluttony.

The plot, such as it is, is wafer thin. This movie really is about two guys laughing and eating and making fun of each other, and the bond that has grown between them. They also exercise a refreshing lack of judgment when they engage, once or twice, in brief, illicit romances. Let the audience do the judging; these guys have other things to worry about.

For Coogan, it’s his son, who’s having a miserable time. For Brydon, it’s that he and his wife seem to be passing each other on the down slope of a marriage (to paraphrase Pacino in Heat).

But serious moments aside, The Trip to Italy is joyous. As sequels go, it may be unnecessary, but it ends up being worthy. And what other comedy (lately, anyway) is going to assume its audience knows the work of both Lord Byron and Percy Shelley? And if you don’t know, Brydon and Coogan will educate you without being dicks about it.

As for the picture’s funniest moment, it’s a toss-up. Is it when Brydon and Coogan visit Pompeii and Brydon pretends to be a preserved volcano victim gently deriding Coogan for being Coogan? Or is it any moment they drive somewhere together and quietly, and a little bashfully, sing along to an Alanis Morissette song booming from the car stereo?

The fact that The Trip to Italy is a sequel means there must be a market for it somewhere, and hopefully the market continues to be robust. I’m ready for trips to Spain, Germany, the Maldives, India, China and Japan, and what Michael Caine—as played by either Brydon or Coogan—would think of all this.

The Trip to Italy