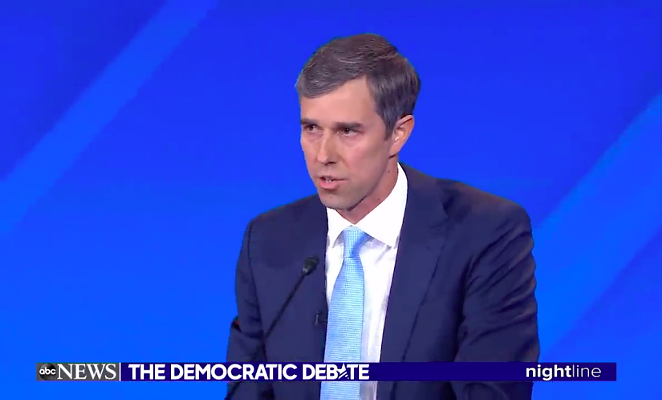 Julián Castro and Beto O'Rourke, both looking to revive flagging campaigns, found opportunities to stand out during Thursday's Democratic presidential debate — but not always in a good way.

Castro, a former San Antonio mayor, went on the attack early, landing a verbal jab at Joe Biden. In the testiest exchange of the night, Castro accused the frontrunner of flip-flopping on whether his health care plan would automatically enroll people in a public option.

“Are you forgetting what you said two minutes ago?” Castro asked repeatedly, a not-so-subtle suggestion that Biden's age may have caused a verbal slip. News organizations later checked the tape and found that Biden was consistent in saying that anyone who can't afford his private plan would automatically be enrolled in a public one.

Castro won applause when he discussed systemic barriers faced by people of color and revealed his decision as a San Antonio councilman to leave a job at a top law firm so he could vote his heart on an environmental matter.

However, it remains to be seen whether the former Obama housing chief's confrontation with Biden won points with voters or made him look mean-spirited and ageist.

Former El Paso Congressman O'Rourke came into the campaign buoyed by high expectations, but his poll numbers plummeted after stiff performances in the previous two debates. He needed a win Thursday night — and he got it.

Several other candidates gave O'Rourke love for his head-on efforts to address gun control and white nationalism in the wake of the recent mass shooting in his hometown that targeted Latinx people.

“To look into the eyes of those people, to see those kids, to understand those parents, you understand the heartache,” said Biden, also who also apologized for calling him “Beto” instead of “Congressman O’Rourke.”

During his mic time, O'Rourke also seemed more relaxed and authentic than in previous debates, showing an emotional connection to people affected by the massacre. What's more, he didn't flinch on gun control, making no attempt to sidestep what his proposed assault-weapon buyback actually does.

“Hell yes, we’re going to take your AR-15, your AK-47," O'Rourke said to one of the night's biggest eruptions of applause. “We’re not going to allow it to be used against our fellow Americans anymore.”