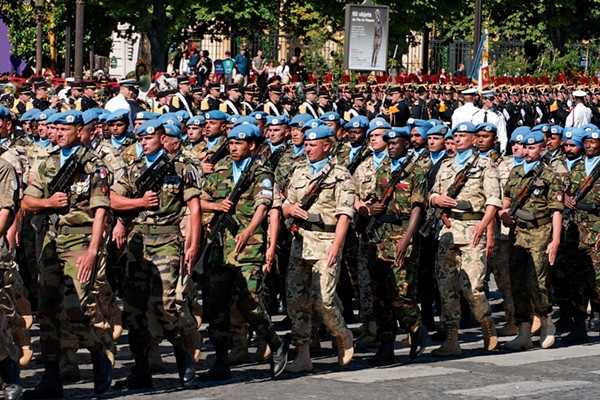 Maybe the federal government really is looking out for Texas with Operation Jade Helm 15 — the summer multi-state military exercise that is really an attempt to conquer the Lone Star State, according to anyone who knows anything.

And that's because it's only a matter of time before the United Nations sends a "peace" keeping force to secure the San Antonio Missions.

New Braunfels State Representative Donna Campbell tried to stem the U.N.'s aggression with a bill that would ban foreign control of the Alamo, though she left the rest of the Missions out of that effort. Not much came of that.

And it's too bad, because the International Council on Monuments and Sites, an advisor to the United Nations Educational, Scientific and Cultural Organization (UNESCO) on cultural property nominations, recommended that the San Antonio Missions be nominated as a World Heritage site.

There's still time, though, to stem to blue tide. Maybe Campbell's bill would actually mitigate the impending hostile takeover so legislators should work to approve it before the International Council on Monuments and Sites holds its 39th annual session in Bonn, Germany, between June 29 and July 8.

To be clear, this is great news. The United Nations is not trying to take over the Alamo just like the federal government isn't trying to take over Texas during Operation Jade Helm 15. Texas actually joined the United States and was subdued during the Civil War after it tried to secede with the rest of the south, according to, you know, history.

World Heritage designation of San Antonio's five missions would generate between $44 and $105 million each year in economic activity, create 500 to 1,000 new jobs and provide an additional $2 million in local hotel tax revenue, according to Bexar County.

If the San Antonio Missions receive the designation, the historic structures would be the first World Heritage site in Texas.