The Weird Wonders of The South Texas Popular Culture Center 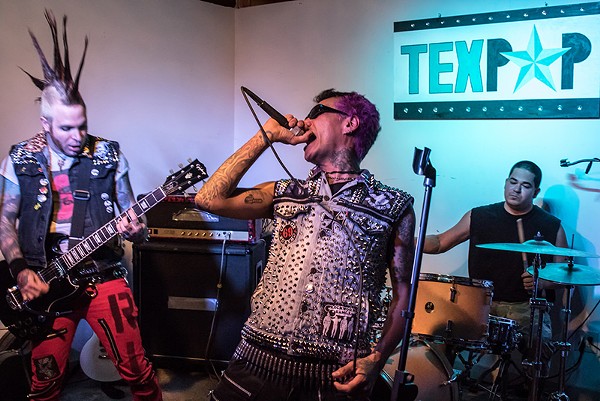 For a museum to be successful, there’s a certain character it must achieve — something about the building, its contents or its staff that couldn’t be repeated anywhere else.

Tex Pop, one of San Antonio’s odder cultural institutions, has an abundance of character. At times, it’s all they’ve got. In a strip mall by the corner of Broadway and Mulberry, its inconspicuous wood sign is sandwiched between a Planet K and the Broadway Grocery Stop. Once, planning to meet its proprietor Michael Ann Coker, I waited outside Tex Pop for an hour because I couldn’t actually tell that it was open.

But the idiosyncrasies of the building emulate the weirdo stuff that Tex Pop seeks to cover — those kinks, like a strip mall museum, that couldn’t exist anywhere but South Texas.

“We’ve got such a rich history,” Coker told the San Antonio Current last week. “San Antonio culture is a bit of New Orleans, Mexico, country western, heavy metal — it’s such a big story. And that’s what we’re trying to tell.”

It’s no coincidence that the Austin and San Antonio centers both neighbor a Planet K. Michael Kleinman, the founder of the interstellar-themed head shops, donated the space for both projects. In a way, Tex Pop is a gift from the weed economy, allowing the museum to run exhibitions, often about weed-inspired music, without having to worry about rent. (Tex Pop thanks you for smoking.)

Inside, the space is part performance hall, part gallery space. During exhibit openings, if you’re next door grabbing a tall boy, concerts rattle the shelves of the Broadway Grocery Stop. On the spare white walls, Artyfacts from the psychedelic and soul eras tell the story of San Antonio through posters, concert pics and LPs.

The best of Tex Pop’s art functions as conversation pieces, sparking a discussion with Coker, Moser or Tex Pop collaborator Jeff Smith. A visit to the gallery would be remiss if you didn’t check in with one of the curators to get the full story, however lewd, of that rock ‘n’ roll scene on the wall.

The current exhibit, “Terror in Taco Town,” explores the punk scene from 1978 to 1986. On Sunday, in one of the better-attended Tex Pop openings, the building was packed with the sweat and sounds of the era, featuring performances from Heather Leather, The Screech of Death and The Semi Automatics.

On the walls, crowd favorite pieces included the original signs to punk bars like Taco Land, the Bone Club and Raw Power and Light Company — “a biker bar, a drug den, a gay bar, a live music club and a neighborhood bar,” according to Jeff Smith.

With long sideburns, an encroaching mullet and a pearl snap shirt, Smith looks like a Hunter Thompson vision of a cowboy punk. He’s also the curator of “Terror in Taco Town.”

[Slideshow:50 Photos Of Tex Pop’s Terror In Taco Town That Are So Punk Rock]

A punk exhibit poses a few curatorial challenges. Recording money wasn’t there and bands came and went about as fast as a hardcore setlist. With punk, there’s also the politics of definition.

“Punk music at that point in time was just really outsider music,” said Smith. “Punk — it’s easier to say what it is than what it isn’t in some ways. In 1978, you could say, ‘that band’s punk, that’s not punk.’ But two years later your idea of what those same bands were changed.”

The prize relics of “Terror in Taco Town” are the newspaper clippings that try to reckon with the music. Headlines like “Terror In The Malls” and “Pure Punk and Putrid” spread rumors and fear about the fast new music.

In a December 1982 article, The News leads with the gripping title “Grotesque Punkers Rock Malls, Wail Over Arrest.” In the columns, the reporter describes a Wonderland performance in which the members of No Way Muffo (featuring Texas Public Radio’s David Martin Davies) were arrested after an impromptu, “horrible and unbelievably loud” gig.