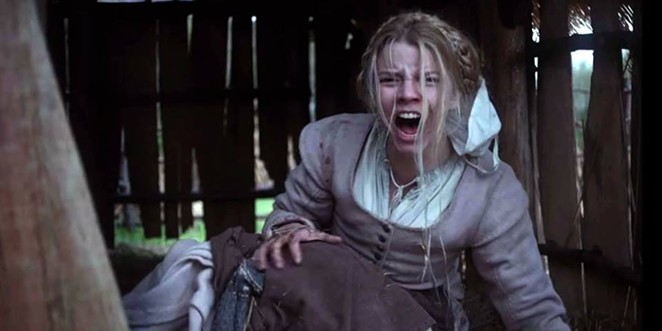 Robert Eggers’ The Witch is the kind of horror film modern directors hardly ever dare to make. There are no standard jump-out scenes like the ones the Insidious series so frequently employed; an effective trick of the trade that serves to awaken viewers out of their lulled stupor but never latches onto the audience in a lasting manner. Furthermore, there is a bare minimum of blood and gore seen within the movie, which may make fervent idolizers of the Saw and Hostel films walk out of this flick within the first ten minutes.

For me, Eggers’ psychological horror revamp is all about the mood. It’s all about the dread and anxiety that presents itself whenever Mark Korven’s eternally ominous score seductively inches its way into the scene. Adding to the film’s menacing feel is Jarin Blaschke’s expert cinematography; many of the shots are lit practically with candlelight, giving ample opportunity for plenty of intimidating shadows to occupy the frame.

Lending to the film’s undeniable authenticity is the superb matter of fact manner in which every actor executes their easily digestible 17th century dialect. Unlike the Masterpiece Theatre parlor plays that dominate public television (the movies your grandparents love), the dialogue in The Witch is recited in an understated and naturalistic manner that is more akin to the mumblecore movement than the self-awareness so evident in the aforementioned Victorian dramas, where the actors enunciate every archaic phrase as if to let the audience know how superficial and outdated their dialogue truly is.

The story centers around a New England family that is banished from their 17th century colonial settlement due to the patriarch’s religious beliefs that are in direct opposition to the community’s ideologies. Taking their five children with them (including a newborn infant), the couple ultimately transplants themselves to a remote farmhouse that borders the opening of a vast and mysterious wooded area.

It doesn’t take long for unfortunate events to occur. The infant disappears from plain sight. The oldest son gets lost in the woods. The family’s prized goat, Black Phillip, seems to give everyone the evil eye. Slowly and gradually, the cohesive family unit begins to dissolve, with each domestic member turning on each other in understated paranoia.

With a movie simply called The Witch, the evil-doing titular character is rarely seen onscreen. This may upset some viewers if they were expecting a regurgitation of Suspiria or The Lords of Salem. However, the witch’s absence from the viewer does not mean that her presence is not felt throughout the flick as the family’s self-destruction is brought about solely due to their own ignorance of the evil force that has decided to prey on their household.

This slow-burn psychological horror film is not for everyone – and not for every horror fan for that matter. If you get your rocks off from inventive gore, morbid comedy, heavily plot-based fare full of high-speed coed chases in the woods, or heart attack-inducing jump-out scenes, then I would suggest that the reader stay home and rent the latest Video on Demand horror flick.

However, if you can appreciate a slowly paced psychological horror film whose ominous mood lingers in the nether regions of the mind days after the movie has been viewed – if the reader can recognize the merits of the atmospheric textures evident in such films as Rosemary’s Baby, Session 9, or House of the Devil, then I would extend you an informal invite to head to your local movie theater to watch this Sundance-winning horror achievement.