The woman who beat the government's border wall 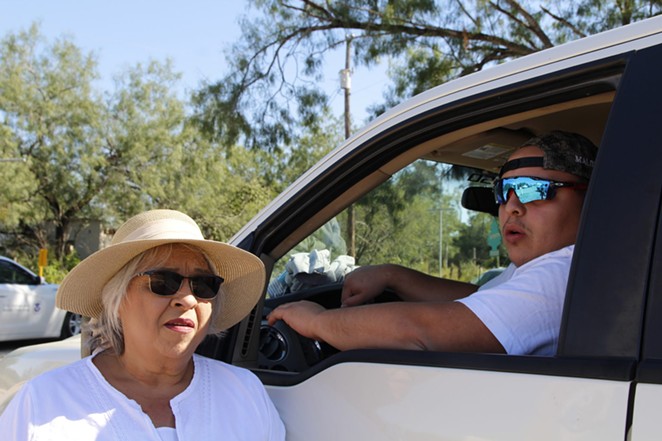 On a cool September morning, Pamela Rivas picks me up at my hotel in a light beige F-150 driven by her 24-year-old son, Ivan. Country music plays softly on the stereo. We’re in Edinburg, the Texas border city where they now live, but we’re headed west. A 60-year-old registered nurse, Rivas is taking me to see the land where she’s from—a property she’s spent nearly 15 years fighting to save from border wall construction. It’s a fight she’s just won.

As we drive Highway 83, the land subtly shifts: elevation rises; riverbanks steepen; the brush country starts to roll. After just shy of an hour, we turn south onto the only road to Los Ebanos, the unincorporated town of a few hundred residents where Rivas lived until the second grade. We’re flanked by fallow fields when we see our first Border Patrol SUV, garish in its green and white, parked beside the shoulder. Rivas and Ivan grow heated: When we leave, they predict, we’ll be pulled over and questioned by some combination of law enforcement ostensibly looking for smugglers. It happens every time, they say.

We reach Los Ebanos. Named for its abundance of Texas ebony trees, the town is nestled in a bend in the río such that water surrounds it, Mexico surrounds it, on three sides. A few quaint casitas, a ballpark, a catholic church. Outside one house, Rivas’ cousin waves. Then, the town cemetery looms, well-maintained and brimming with bright flowers and American flags. Generations of Rivas’ family are buried there, including a Mexico-born grandfather, shot and killed in a property dispute near the graveyard in 1923.

It’s easy to miss Rivas’ land, when you first arrive. The eye is drawn instead to a line of cars and inspection stations leading to Los Ebanos’ biggest and only tourist attraction: A privately owned hand-pulled ferry that shuttles customers across the Rio Grande, for $5 a vehicle, to the larger Mexican town of Díaz Ordaz. The ferry is the last of its kind, a relic of a bygone era when the border was much more open. For 60 years, the international port leading up to the ferry was little more than a dirt road and a shack, but a decade ago the federal government “modernized” it, paving and expanding the inspection area. Rivas lost some land to that expansion, but she retains about 20 acres, which extend off to both sides of the port.

Rivas and I get out to walk the property, while Ivan stays in the parked truck. We go right, where an abandoned one-story house sits partly obscured by mesquite and uncut grass. “This used to be my home,” Rivas says. She points in front, where her mother had orange trees, and in back, where her father kept cattle. Rivas moved with her family to Edinburg in the late ’60s, but for years they returned for holidays and to hunt, fish, and swim. She points out survey stakes, maybe 10 yards away, which still mark where the federal government had planned to build an 18- to 30-foot tall border fence through her land.

As we’re talking beside the old house, Rivas’ tinny preset ringtone sounds. Ivan’s calling from the pickup. Within minutes of us leaving, Border Patrol agents — who claim expansive power to traverse private property within a certain distance of the border — had arrived to question him. Get their badge numbers, Rivas advises. Not long after, an unmarked black truck comes driving from upriver. It stops.

“How you doing, ma’am?” asks the plain-clothed driver. Rivas whips out her phone to record. “I’m with Border Patrol,” he clarifies.

“In an unmarked truck, why is that?” she asks.

“Because I work undercover.”

“Agent Garza,” he says, showing her his badge. She goes to take a picture, but he snaps it shut. “I’m not gonna let you take a picture of my badge. … This your land, ma’am?”

“How about that side over there?”

“How far down does your land go?”

“You’re not planning to sell some of the property?”

Annoyed, the man drives away. Rivas sighs in frustration. “I’m on my property; I’m not doing anything and they come and go as they please,” she says. “It’s one battle after another for me.”

About 14 years ago, shortly after Rivas inherited the land, the Bush administration moved to seize about an acre of her property for border wall construction. Many Texas landowners — often intimidated or misled — allowed government agents to survey their property and accepted lowball offers for their land. Rivas’ father, who passed away in 2008, essentially advised her to do the same: “My dad was sitting at the kitchen table and he told me, ‘You’re fighting the government; you’re not going to win’,” she recalls.

But Rivas resolved to fight. She found lawyers with Texas RioGrande Legal Aid, who threw every argument they could at the Justice Department. Rivas testified in court, and, when the case went briefly to the 5th Circuit on appeal, she traveled to New Orleans. The sum effect was to slow things down. The government technically seized the land in mid-2008, but no wall was built. Barack Obama took office, and, while he erected dozens of miles of wall farther downriver in South Texas, a lack of funding and concerns over flooding stymied the fence in Los Ebanos and neighboring Starr County.

All along, though, Rivas’ legal case stayed open. The Obama administration declined to return her property, and she refused to accept any offered price, a holding pattern that also trapped other nearby landowners. When Trump took office, he stepped through the door Obama had left open, expanding the old case to target an additional 1.6 acres of Rivas’ land to accommodate his super-sized wall. Again, this time with the help of the Texas Civil Rights Project, Rivas deployed every delay tactic at her disposal, in a bid to outlast Trump. “There was many times that I wanted to give up; I just wanted the stress out of me,” she says. But she didn’t.

For Rivas, wresting back her land was about protecting her past. “The memories that I have are just so sentimental: my parents, their stories, how my dad would go and chop trees to clear an area … my brother was born and their little home was so cold the baby was crying, “ she says. “I learned how to hunt there, how to shoot a gun, shooting snakes, rabbits.”

January 2021 came, and Trump still hadn’t built any wall in Los Ebanos. For eight more anxious months, Rivas waited. Finally, on September 21, the Biden administration returned all her seized land. In dozens of other cases, the feds appear to be moving in a similar direction, in one of the clearest signs yet that Biden, with some perplexing exceptions, is truly terminating the South Texas wall. The victory is Davidesque. But, as Rivas knows well, the wall was but one piece of a decades-long trend of militarization.

Cicadas buzz. Latin pop and norteño drift over from the cars waiting for the ferry. A great kiskadee flits among thornscrub; a white surveillance blimp hovers against the horizon.

We return to Ivan. Rivas wants to show me the other side of the property, but a recent rain has turned a rut in the road to mud. Ivan and I decide to make the trek. I struggle not to slip without grabbing the nearby thorny branches for balance. As we walk, Ivan indicates where Border Patrol has hacked back the brush to widen the dirt roads. We arrive at a river overlook, where the family once held Easter picnics. These days, he says, agents often perch here to watch for crossings. “It’s pretty nice,” Ivan says. “It’s just not comfortable no more.”

This distaste for surveillance is a family trait. In the early ‘90s, Rivas’ older brother returned to live for a few years in the old family house. Even then, he found himself harassed by agents as he tried to barbecue or enjoy beers with friends. In his 2011 obituary in the Monitor, he is memorialized as “an archenemy of the U.S. Border Patrol.” An aunt was also asked in a 1999 Monitor article about the problem of illegal immigration: “They don’t bother us, we don’t bother them,” she stated flatly.

We pile back into the F-150 to return to the city. As we pass the empty farm fields again, a military helicopter flies overhead. To Rivas and Ivan’s astonishment, we escape without getting pulled over this time. Perhaps it’s because of me, a white guy with a camera, they speculate. Rivas reflects on her “bittersweet” emotions. She won her land back, but it still feels invaded. And the victory took so long. “My brother, the one that was always fighting with the Border Patrol… my dad, who told me at the very beginning, ‘You don’t win against the government,’” they aren’t here to see it, she says.

With the land finally hers again, she turns to thinking about the future. Maybe she’ll build a new house there one day. She’ll need a barrier of some sort, she says, to mark her property and repel Border Patrol vehicles. Maybe concrete posts with a chain connecting them, she suggests. Probably not a fence, though. She’s had enough of fences.