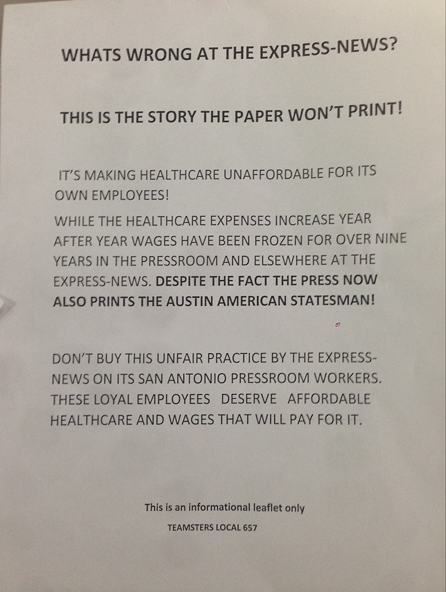 The workers who print your daily newspaper handed out fliers outside the San Antonio Express-News building downtown Wednesday demanding a wage increase to keep up with rising healthcare costs, something they say hasn't happened for about a decade.

Phil Bunker, vice president of Teamsters Local 657, which represents the press workers, says the union took to the step of leafleting outside the building because contract negotiations with Hearst, which owns the daily, have been stalled for months. Meanwhile, he says, workers are forced to deal with rising out-of-pocket healthcare expenses while their pay remains stagnant. "The problem is, some are now essentially being priced out of their health insurance because the Hearst corporation will not discuss any wage increases," Bunker told the Current Wednesday.

If you've spoken to any of the number of Express-News reporters who've left the paper in recent years, it should come as no surprise that pay has remained relatively flat at the daily over the past decade. But Bunker says that has hit the building's press workers particularly hard. He estimated that healthcare premiums for those workers have risen somewhere close to ten percent in recent years. Meanwhile, he says maximum out of pocket expenses for a family plan went from about $4,000 in 2011 to nearly $13,000 this year.

"That’s where they’re getting them... It’s coming out of their pocket to pay for a bunch of stuff that before was covered," he said.

Bunker says the union, which represents about 30 press room workers, didn't even try to negotiate a pay raise over the past decade because of the shaky state of the news industry and the recession. And even as overall daily circulation has plummeted for the daily over the past decade (from around 230,000 copies to 133,000 at the end of 2013, according to the most recent audit) the press room continues to take on new business. Just last year, Cox Media Group, which owns the Austin American-Statesman, stopped publishing in Austin and tapped the Hearst-owned Express-News and Houston Chronicle printers to put out its papers.

The last time the union sat down with Hearst lawyers to talk worker pay was in March of this year, Bunker says, when parties hammered out a tentative agreement on some sort of incentive plan for workers. The idea, he said, was workers who cut costs, reduced waste and implemented more efficiencies would see pay bumps.

The plan, however, never materialized because Hearst never followed up with an actual offer, Bunker says. The paper directed our questions to Susan Lynch Pape, who was recently named the new publisher of the daily; she didn't call us back on Wednesday.

Roy Lopez, who's worked the presses at the daily since the late 1970s, was among the workers passing out leaflets Wednesday. He says the days of austerity should be over at this point. "Back when the economy collapsed, we agreed with them, we knew nobody could be getting a wage increase," he said. "But we're now at the point where even McDonald's and Walmart are starting to pay people more. Why not us?"

As to why Hearst won't budge on pay, this was Lopez's take: "We strongly believe they refuse to negotiate any wage increase so they don't have to look at wage increases throughout the company. We're not the only ones."