The Yanaguana Garden at Hemisfair Pairs Art with History and Play 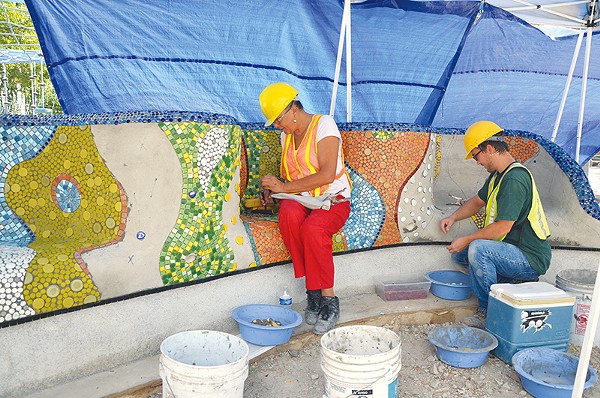 A long time ago, before there was a Bexar County or the bustling metropolis called San Antonio — or even Texas — there was a blue panther that lived in a blue hole.

One day, a water bird flew into the hole where the panther lived.

"And the water bird shot out of the blue hole and opened its wings and the droplets from the blue hole fell across the land, which gave life to the area," said Ramon Vasquez, executive director of the nonprofit American Indians In Texas At the Spanish Colonial Missions.

This is the story of where Yanaguana, a Payaya Indian village on the San Antonio River came from. Nowadays, the Tower of Americas overlooks Hemisfair Park — an area that used to be a neighborhood before it was bulldozed by the city to make room for the '68 World's Fair.

In 2009, a new chapter was opened with the creation of the Hemisfair Park Area Redevelopment Corporation. And three years later, the city issued $30 million in bonds to fund three phases of redevelopment. The first, called Yanaguana Garden, will open at 6 p.m. October 2, coinciding with First Friday.

The 4-acre park is dynamic, featuring climbing structures, a splash pad, over-sized chess, sustainable greenery, public art installations, all of which are centered around the Yanaguana story.

Enter Oscar Alvarado, a San Antonio artist whose mosaic sculptures and murals can be found all around the city, such as the San Antonio Riverwalk stairway. The story of Yanaguana will flow like the river throughout the park.

For roughly five months, Alvarado and his team have meticulously set thousands of pieces of glass and porcelain into Gaudí-like benches, in undulating patterns on splash pads and on a nearly 5.5-ton sculpture called "PanterAzul," the blue panther that chased the water bird — an anhinga — out of the blue hole.

The climbable panther is made with 150 pounds of steel, 10,500 pounds of concrete, 200 pounds of mortar and grout, and 150 pounds of glass beads. It's surrounded by a thick layer of colorful rubber and play areas for children. The anhinga is perched on top of a mosaic bench across the way.

Vasquez said he is satisfied with the inclusion of Native American history at the park.

"I'm looking forward to taking my grandchildren. It's really good for San Antonio. You know, my parents used to take me and my siblings to Hemisfair, and we spent a lot of time there," he said. "Over the years, it's kind of lost its attraction for residents and that's one of the main reasons we decided to share our story. It's a way to give something back to residents as native people."

He calls it a rejuvenation.

"It's going to be a powerful opportunity," Vasquez said. "We've been talking with the Hemisfair project about being included in educational programs that will happen with the new gardens. It's really important to have original people involved in telling our story to visitors."

While Alvarado is tasked with telling the Yanaguana story, a team of six San Antonio artists led by Stuart Allen created a series of installations called PLAY.

Each installation will stand on its own, but will reflect the larger project.

PLAY's goal is summed up in the project statement:

"Of course 'play' is a multifaceted term and the artist team is considering the word from many perspectives: from the idea of imaginative children's play, to a dramatic production, to the notion of playing with time. And while children are a primary audience, the installations that make up PLAY will possess a depth of meaning that will maximize the potential for intergenerational engagement, socializing, creativity, resourcefulness and fun."

Allen created "Kite Table," which is a galvanized steel table with directions on how to make kites in the American, Korean, Guatemalan and Japanese traditions etched onto the table's surface. Each of those countries also had a presence at the '68 Worlds Fair.

Hemisfair Park Area Redevelopment Corporation CEO Andres Andujar, who described the table as steel origami, said more than 1,000 kite-making kits will be provided for workshops. The kits are being provided by the nonprofit, Seattle-based Drachen Foundation, which is a kite archive and resource center. Allen has served on its Board of Directors for more than 15 years.

While Allen's "Kite Table" combines the heavy with the light, Boyd's "Sound Scout" isn't exactly visible. Boyd is focusing on the acequia that runs through the Yanaguana Garden with lines of trees on each side. He has installed speakers in the trees that turn the sounds of children laughing and playing into a water-like sound.

"Processing children's laughter into waterlike [sic] sound makes a simple yet poetic statement speaking to the history and use of the space," he writes in an artist statement.

Fauerso's "CAMPSITE" is just like it sounds, four "powder-coated steel 'pup-tent' forms" in a camp circle. Low-voltage LED lights will illuminate the tents while encouraging human engagement and create an "imaginative place for children to gather, discover, and make-believe."

"My idea is that play in public, both as a theme and as an activity, flourishes in incomplete spaces that invite improvisation and story making," Koshbin writes in an artist statement.

"Keeping the overall structure very open and light, key structural elements of the playhouse (walls and roofline) will be framed in white powder-coated steel with a scaled floor plan etched into the concrete slab," Mahaffy says in her artist statement. "Exterior wall sections will be created with perforated steel panels, laser cut with period wallpaper patterns, and roof panels cut to mimic large shady pecan trees."

Rubio and a team of students with the Blue Star Contemporary Art Museum's MOSAIC Initiative will install a psychedelic-looking mural that will be installed for two or three years before another one takes its place.

All of this excites Andujar, who says PLAY, the Yanaguana Garden and the story of Native Americans all fused together to create an educational and engaging park that will be a destination for the young and the old, the resident and tourist alike.

"It's is so exciting and seems like sort of a dream," Andujar said, reflecting on the process.

"I think that it is pretty significant that our bringing back (the area) to life, it's very symbolic," He said. "Hopefully, many residents will be able to share in its treasure."

But there's still much to do, including the next two phases of the project: Civic and Tower parks.

However, like the San Antonio River's creation when a water bird flew into a blue hole and out again bringing life to the region, the Yanaguana Garden is just the beginning.

Ring in the opening of Yanaguana Garden at 6 p.m. on First Friday for a family-friendly night in the park with music, food and a beer tasting.

Join the official ribbon cutting at 10 a.m. and play in the park all day long. There will be music and programming for the whole family.

Join all six artists for a day of creative PLAY for children and fitness demonstrations and food for adults.