The Year in Drunk: 8 hazy recollections of 2013 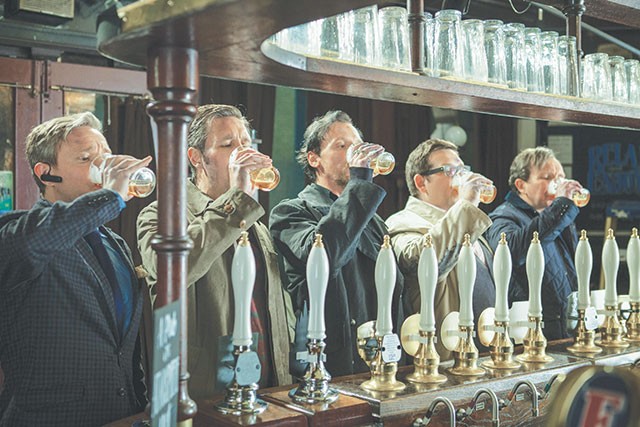 The sloppiest celebrations of alcohol in 2013.

8) “Drunk Last Night” – Eli Young Band
Normally, when you want to talk about alcohol in pop culture, you go straight to the country charts. But this year, they were all too busy getting stoned to write a proper drinking anthem. Seriously, if you want to burn one down, the genre’s breakout stars Kacey Musgraves, Brandy Clark and Ashley Monroe all have great weed songs out this year. Even this hit by the Eli Young Band seems remorseful with its “I swear it’s the last time every time, don’t know why” whining. If your jam is feeling bad about boozing, for my money, I’d turn to Pistol Annies’ lovely, heartbreaking “Dear Sobriety” off this year’s Annie Up. Not near the hit “Drunk Last Night” is, but beats it in lyrics, singing and instrumentation.

7) Man on Trial for Selling Fake Wine to Rich Idiots
Let’s all leave a little in our glass for Rudy Kurniawan. He may not have participated in any drunken stunts this year, but he did make millions selling fake super-rare fine wine to people like William Koch (yes, that Koch). His defense claimed that Kurniawan was himself duped and was from a wealthy Chinese family, but that won’t stop sites like Gawker from canonizing him for his role in what the Times called “a display in how people assign value to things they do not even understand.”

6) Drunk A&M Girls Interrupt Reporter
They had me at “Johnny Football, wooooo!” When people call Southern women “steel magnolias” surely they’re referring to these two shiny-haired, expertly eye-linered, fur vest-wearing Texas A&M co-eds who had the cojones to crash a hapless reporter’s pre-game spot before the Aggies’ Cowboys stadium game against Oklahoma University on January 4. Props to the awkward reporter for quickly turning it into a “(wo)man on the street” interview with the wasted chicks, as his anchorwoman howled with laughter back at her desk for Dallas’ CBS 21. Their insights were few (“I know Johnny Football!” and “We have always been great, in this, like, SEC”), their handbags impressive and their balance questionable (I’m pretty sure the blond one stumbled off camera), but as Johnny Reporter concluded, “I think that was perfectly fine, I think they were in their right mind, nothing wrong with that at all.”

5) Kenneth Faried’s a Sexy Individual (and other musings)
What begins as a cringe-worthy TMZ video with tipsy Denver Nuggets NBA star Kenneth Faried as he’s exiting a club (the white ‘n’ nerdy videographer asks how long it takes to grow dreads, causing a member of Faried’s entourage to exclaim, “What the fuck is this shit?” and promptly take over the camera with the reasoning, “I’m black.”) turns into internet gold. Faux-aggravated that the videographer didn’t know who he was, Faried whips out his cover of ESPN Magazine’s Body Issue (on which he appears nude), shoves it toward the camera lens and says, “look at them yams, oh my God, look at them abs,” and tells the interviewer he wasn’t nervous during the photo shoot because he has a big dick. Duh.

4) Reese Witherspoon Getting Arrested
I drew the line at most DUI and other drunk and disorderly arrests because, well, they’re not generally that funny and can sometimes be quite worrisome. But apparently, even Reese Witherspoon thinks the video from her April arrest was pretty hysterical. Witherspoon and husband Jim Toth were pulled over in Atlanta, Ga. and Toth was arrested for a DUI. Witherspoon, who later admitted on Good Morning America that she was hammered at the time, got indignant, refused to obey the officer’s order that she stay in the car and used all sorts of quotable excuses while doing so. After first pleading that she was pregnant and needed to pee (always believable coming from a drunk woman) she then fell back on the old reliable “I’m a U.S. citizen, I’m allowed to stand on American ground.” She then dropped some script-worthy lines like, “I’m obstructing YOUR justice?!” and, “this is just BEYOND” before getting arrested for obstruction of justice.

3) ‘The World’s End’
One of critics’ favorite comedies this year centered on delusional middle-aged loser Gary King (Simon Pegg, Hot Fuzz, Shaun of the Dead) and his demented quest to get his gang of high school chums back together to finish a pub crawl they’d abandoned more than 20 years ago. As they stumble from tavern to tavern in their quaint English hometown, the boys get just bleary-eyed enough to see that all’s not well in the hamlet. Soon they’re decapitating bad guys, mending fences and saving the world, as one does on a right proper bender.

2) ‘Drunk History’
Surprisingly, this was not just an extra credit assignment by hammered liberal arts students. Upon debuting on website Funny or Die in 2007, Drunk History had said wasted liberal arts kids in tears with ridiculous revisions of history courtesy of some drunk who’s perpetually on the cusp of vomiting. If you’ve ever listened to your inebriated college roommate tell you “what really happened” with communism (guilty) and wished for some celebrity cameos to make it even funnier, this is your show. Comedy Central picked it up this year, complete with a hysterical retelling of the battle of the Alamo by Comedy Bang Bang’s Matt Gourley (also starring Saturday Night Live’s Chris Parnell as Jim Bowie and a cameo by SA’s Esquire Tavern). It’s been renewed for a second season in 2014. I’ll drink to that.

1) French Teens Take Llama on Subway Joyride
Let’s cut to the chase. This was the coolest thing to happen this year, period. Fuck Paul Ryan and Patty Murray’s budget deal. Fuck Beyonce’s surprise album. Fuck legalizing weed and gay marriage. Five young French dudes got drunk in Bordeaux (as is customary), broke into a circus and left with Serge the Llama, who they tried to take on the metro with them in a prank respected French singer Serge Lama (no relation) said “helped break the ambience of moroseness in France.” Salut!