There is a 'Rapper' Who is Repping Ted Cruz 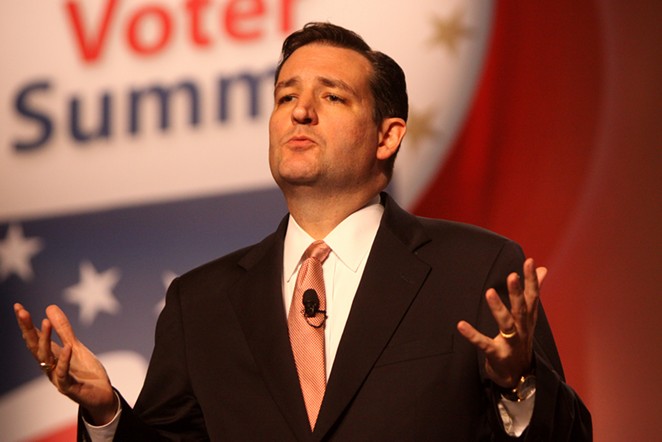 Ted Cruz, the Republican candidate whose policies, demeanor and 'tude share so much in common with every christian bigot, philanderer and kiddie-toucher that has ever been caught banging their secretary in the rectory or smoking meth with their 20-year-old, prostitute boyfriend, has christian rapper Jük's support!

The good news for hip-hop fans and anyone that isn't into appropriating African-American culture to help elect a white, christian male is...Jük sucks.

The hip-hopper states that he felt compelled to spit his righteously hot, fire and brimstone rhymes due to the lack of coverage that Ted "gift from God" Cruz received in the first two Grand Old Party debates.

Here are some examples of the mad ill shit Jük drops (the illuminations in parenthesis are mine):

"He's taking down Obamacare and Planned Parenthood/one is disgusting the other's no good (vaginas are scary and icky)/he's taking down Dodd-Frank and weak immigration (fuck immigrants)/building back up our military foundation (WAR ROCKS!)/he's fighting for the christians who are losing their freedoms (yup)/for the Bill of Rights endowed by our lord Jesus (Jesus does hate immigrants and totally digs war)/he's looking out for Israel, whipping up an Iran deal to get those so-called infidels killed (murder in God's name rules).

The good news (white people) is you can now show your grandparents that rap is not all about guns and drugs and sex and scary black people that don't have waterfront property and don't breakdance in their rooms with a Ted Cruz mask on and don't have dancers in Obama and Hillary Clinton masks. Y'know, that real hip-hop ssshhhhhiiiiit.