There's a New Brunch Spot in the Works for Cookhouse Owners 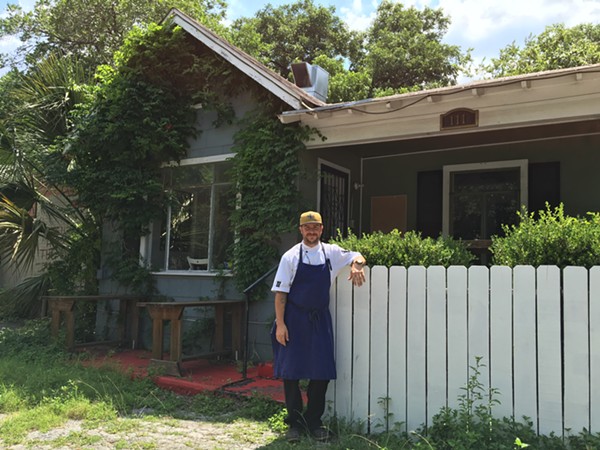 The corner at St. Mary's Street and Mistletoe Avenue is months away from a new restaurant via the owners of The Cookhouse.

If your mouth isn't watering yet, a) you might be dead inside and b) we can't be friends. Chef Pieter Sypesteyn shared the news of NOLA, named after 's New Orleans, Louisiana roots, a new brunch spot opening at 111 Kings Ct. by the end of the year.

NOLA will offer full-time brunch five days a week from Tuesday through Saturday. For Sypesteyn, a lack of breakfast options other than awesome breakfast tacos was what prompted him to look into opening his own spot. The chef, who previously worked with Andrew Weissman at Il Sogno, first opened Where Y'at Food Truck in 2011 and later The Cookhouse in 2014.

Fans of the Creole/Cajun New Orleans kitchen can expect similar flavors at NOLA, but don't go searching for more muffalettas or po'boys.

"It's going to be casual. It's not going to be like a taco joint where you can get a complete breakfast for $4, but we're hoping to keep prices at $15-$20 per head," Sypesteyn said.

Though the space, a former homebrewing supply store, will require a thorough build out — with design work by work5hop's Rebekah Perez and Jay Louden — Sypesteyn's NOLA menu is coming together already. He mentioned a few items that will adhere to traditional New Orleans brunch themes with fun spins including the grillades and grits with fried oysters, a NOLA-style eggs benny with pain perdu (Nawlins-style French toast) topped with a griddled boudin patty, a poached egg and a ladle of gumbo. Other items will include a hash brown cake with fried egg and guajillo gravy, brabant potatoes, malted wafflers and a ham and cheese waffle.

On the drink front, you won't find bottomless mimosas or any alcohol for that matter, but NOLA will feature fresh juices, coffee drinks and cane juice. A small a la carte market featuring The Cookhouse's house-made sausages and cured meats is also in the works.

NOLA will feature both indoor and outdoor seating for about 60 brunch-goers (that's 11 more seats than at The Cookhouse).