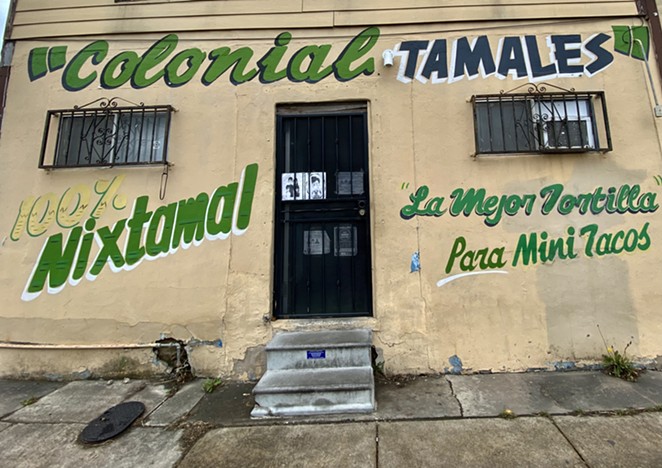 If you haven’t taken a drive down Guadalupe Street lately, let me suggest it’s worth your time.

Beyond being able to experience a wealth of visual and cultural richness, if you keep driving west you’ll eventually come to the San Antonio Colonial Tortilla Factory at the intersection with South Cibolo Street. The entrance is the door on the left. Just stick a finger in the hole where a doorknob would usually be.

The phrase “100% nixtamal” is emblazoned across the building’s façade — and that lime-treated ground corn goes into way more than SA Colonial’s specialty tortillas for mini tacos. The tortilla Siberia is huge, maybe nearing 12 inches in diameter, the earthy-tasting tortilla with flax seeds or chia occupies a middle ground at around 5½ inches. Planning on turning out tacos al vapor? This place has got you covered with a size and formula to make that happen. DIYers can even buy the masa cruda at $1.50 a pound.

But SA Colonial doesn’t stop at tortillas. The chicharrónes de puerco are crunchy, porky and great as a scoop for guacamole — or just eaten out of hand with a dip into the store’s take-no-prisoners salsa de chile de arbol. Tamales are available by the dozen, and my choice of puerco con jalapeño was still warm when I got home and dug in. With long slivers of chile playing against savory shredded pork and moist, red-tinted masa, they were some of the best I’ve had in a long time. Plain puerco, frijol, and frijol con jalapeño are also available.

You could always swaddle either the asado de puerco or chicharrón en salsa verde in the tortillas you buy, but I think their highest calling is to be served alongside some plain rice you’ll have to make yourself. The tender pork is bathed in a moderately spicy red sauce, and the chicharrones, which alternate between silky and slightly chewy, are enhanced by an herby and tangy green sauce. Both are worth repeating.

Five-packs of empalmes — a Nuevo León specialty that was new to me — are available in SA Colonial’s freezer. They’re basically a griddled sandwich, sometimes served with a fried egg on top, with corn tortillas as its brackets and refried beans as a foundation. The discus-shaped empalmes can be cooked directly from the freezer, but I defrosted mine, then toasted them in an ungreased cast-iron frying pan until they were golden on both sides. Success all around with maybe a slight nod going to the more complex and vinegary chorizo with cheese over the shredded beef in a robust red sauce. Salsa de chile de arbol drizzled over both, por supuesto.

Empalmes are traditionally prepared in batches and frozen, but I was less sure about SA Colonial’s chiles rellenos congelados. So, I bought the picadillo version — queso is the other option. I didn’t have a clear picture of the proper method for reheating this egg batter-crusted pepper, which was bedded on a trio of mini tortillas.

Wanting to keep the tortillas moist, I put the whole thing on a plate over some dampened paper towels and microwaved it. It seemed to work. The filling was a unique, cumin-accented “blonde” picadillo — my term, not theirs — that came enveloped in some additional, roasted poblano inside the battered chile. I liked it, despite the lack of the customary tomatoes, carrots and even peas, but a swoosh of salsa wasn’t a mistake.

Should your eyes light on some packets of gorditas de azucar while waiting for your order, go ahead and indulge. They were a sweet finish, and they might be even better dunked into a little thick, hot chocolate or maybe decorated with a slash of dulce de leche.

The Skinny: Beyond its wide range of tortillas, SA Colonial’s worthwhile takeout items include bags of crunchy chicharrones, frozen empalmes and chiles rellenos as well as tamales by the dozen.