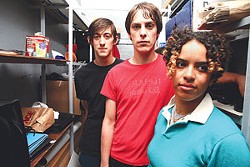 
Released in 2006, the Thermals’ breakout album The Body, the Blood, and the Machine was a masterpiece of Bush-era bitterness. Frontman and lyricist Hutch Harris exorcised his impotent anger at the Christian hypocrisy, American empiricism, and politics of fear that defined the reign of Texas’ favorite son over bassist/drummer Kathy Foster’s unrelenting rhythm section. It’s an alternately terrifying and therapeutic listen, even now, months after Uncle Obama made the bad man go away. The band’s follow-up, Now We Can See, the poppiest yet most experimental release of the Thermals’ career, sounds much happier anyway. At least until you actually listen to the lyrics and discover Harris is singing from the point of view of all the people killed in the horrifying apocalypse at the end of the last album. As they float about all disembodied on the burnt-out husk of planet Earth, they contemplate love, death, and regret — but try not to let the thought bum you out when the Thermals play the Ten Eleven (nee Warhol) Saturday. We spoke to Foster via telephone recently about Texas, the Paper Chase’s John Congleton, and why their latest album sounds so damn happy when it’s not.

You recorded part of Now We Can See in Dallas, right?

Well, we actually recorded most of it in Portland `Oregon` at the same studio where we did The Body, the Blood, and the Machine. We did go to Dallas. We recorded with John Congleton. He flew out to Portland for eight days and did eight days in our studio there, and then a month later we flew out to Dallas and did eight days in his studio `Elmwood Recording`. So we did like two days of finishing up the recording, like overdubs and things like that. Then we did all the mixing in Dallas.

There’s quite a bit of experimentation on the album. I was wondering how much of that you brought into the studio with you, and how much of it came from Congleton.

We pretty much had it all worked out before we went into the studio. Because it was just the two of us doing the instruments we wanted to work it out before we got there.

We made a lot of demos before we went into the studio. We worked out songs and figured out all the parts. We had all the songs worked out and what John did was he just brought his recording style. We like the big sound he has. He gets a lot of big, roomy sound … but we don’t like it to sound too over-produced. … He did a really good job of getting more of a natural sound.

What size venue are you guys used to playing these days?

It still varies a lot throughout the country. Some shows we play to, like, 100 and some shows we play to 600 people. … In New York we’re playing three shows and two of them are sold out already, so we’ll be playing to like 1,500- 1,800 people over three nights. But I like the variation. I like playing small shows still.

I’ve read several reviews describing this as your “optimistic” record, even though it really doesn’t seem to be. Why do you think people are getting that vibe?

I think some of it might be the upbeat rhythm a lot of the songs have. How much of that comes from you?