This fare is phat

Jasmin Thai is a party for your palate 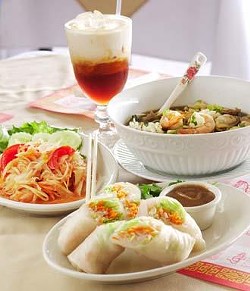 
Thai restaurants are popping up like straw mushrooms these days, and the Medical Center area - broadly defined for these purposes - is fast becoming a hotbed of phat vun sen and yum nahm tok. Not to mention tom yum goong.

The latest addition to the lineup, open about four months now, is Jasmin Thai, a squeaky-clean establishment in a standard strip center on Medical Drive between I-10 and Fredericksburg. (The owners may be new here, but they had experience some years ago at the old Bangkok on Highway 90.) The menu is relatively simple, but it does offer some dishes not altogether standard Siamese, among them, the green papaya salad. Available in a "sweet" version with peanuts or in a more challenging rendition with dried shrimp - one- or two-pepper spicy option - the crisp, crunchy papaya is always a revelation, and the insistent shrimp (yes, they are a little, er, fishy) add an exotic tang to the total taste. Tomato and shredded carrot complete the picture, totally cleansing your palate.

Almost as refreshingly clean are the summer rolls. Although some versions in town have more delicately translucent rice wrappers, these are more generously endowed with serious shrimp, and the thin noodles and shredded vegetables are fresh and appealing. The peanut sauce lacks subtlety as an accompaniment (maybe it's the thick texture that seems inappropriate), but those with a taste for Thai fish sauce augmented with chiles may want to try that sizzler as a drizzler; it definitely perks up the proceedings.

A couple of visits to Jasmin produced the observation that the cuisine, at least as sampled, doesn't depend as heavily on the sharp, citrusy flavors of lemon grass, kaffir lime leaf, and galangal root we may be used to; it has, instead, a mellower, sweeter cast. The gong keowan, a green curry with chicken or beef, first signaled this shift. Served in a large bowl, the curry had the appearance of a New England seafood chowder: white and soupy with chicken breast, bamboo shoots, and green beans bobbing about like lifeboats from a Thai Titanic. Coconut milk was the main matrix, and its mellow flavor was a good foundation for something more; the curry aspect was too subtle for this taster, so I added more of the chile-spiked fish sauce. A battery of add-ins automatically comes with the Jasmin noodle soup, a cultural microcosm in a bowl.

"In Thailand, we would usually put in only one main ingredient," confided the hostess/owner, "but here ... " Here we expect more, she was implying, and we get it, too. Shrimp, squid, beef, chicken, mussels ... you name it, it's probably there. And the result, surprisingly, is not a Thai Tower of Babel; the flavors add up to one of the richest and most rewarding soups I've had in a long time. Of course, there is the usual unruly tangle of rice noodles to deal with - as well as the plate of bean sprouts, cilantro, and shredded lettuce to harvest - but the broth would have been exceptional without added mulch, and the extra condiments (a classy, first-run style fish sauce, peanuts, dried chiles, and even coarse sugar) only enhanced already full flavors. Mellow, remember, especially with the added sugar.

You don't really need an appetizer with this super-scale soup, but the tord mun, or Thai fish cakes, are sufficiently distinctive should the urge arise. Hints of ginger infuse the patties - just slightly chewy as is usually the case - and the accompanying sliced cucumbers with sweetened vinegar and toasted peanut provide pleasant contrast.

The most luxurious item on Jasmin's menu is the crab claws, and they come two ways: with yellow curry or in an uncharacteristic butter sauce. It took some prodding, but our hostess finally admitted a preference for the yellow curry - or at least she thought we would prefer it. Given their form (the claw tips provide a perfect handle), this dish would also make a great shared appetizer. As a main dish, it requires work, even though the meat is already exposed. In either case, the flavor of curry powder comes through, along with perhaps a little dried shrimp and, again, a certain sweetness. Scallion and, unusually, sliced celery (the Thais prefer a version that is mostly leaf, we were told after inquiry) add their influence as well. We liked it.

We also liked the phat pick, a plate of tender, modestly spicy pork in a great gravy. Sometimes gravy is all you really want, and this was another of Jasmin's homey, satisfying plates. However, it lacked that often-exciting contrast of citrus against sharp, relying instead on bell pepper and onion to round out the flavors. Again, great gravy.

House-made coconut ice cream is the staple dessert at Jasmin. Served, as is tradition, with crumbled peanut, ours also came with a cashew topknot; if you're sharing a bowl of the creamy concoction you will have to figure out who gets it. The seasonal mango with sticky rice, on the other hand, almost begged to be shared; there was an entire, massive mango (sliced) alongside the rice. The contrast between this brilliantly colored and exquisitely perfumed fruit and its almost vegetable-like, but equally rewarding, green form couldn't have been more telling. There are lessons to be learned here, and I don't mean just culinary ones. •