Dr. Ray Altamirano is hoping to disrupt the health care industry in a big way – even if just locally for now. Under his plan, patients pay less to be seen by doctors, who could potentially make more money.

All that needs to happen is cut out the middlemen. You know, the insurance companies.

Although patients remain skeptical and doctors aren't keen to jump onboard just yet, Altamirano said practicing a direct-care model, in which doctors bill patients who pay cash to be seen, can be a win-win for both parties.

Under the current paradigm, patients pay a lot of money and doctors receive a small portion since insurance companies take a large cut, the physician said.

"Health care in America sucks," he said. "It's a broken system."

To Altamirano, it doesn't need to be that way. He wants patients to ask doctors about direct-care options and encourage doctors to "grow some huevitos" to practice the model.

"We need to expose what the insurance companies are really doing," he said.

Under a direct-care model, patients ask their doctor not to bill the insurance company. That would require doctors to break down the cost of services the patient is receiving and determining the true profit margin.

In Altamirano's case, he charges a $100 flat fee, including lab work, billing patients directly. While that cost may sound high, especially to low-income patients, he said it's potentially hundreds of dollars less than what they'd pay if billed through an insurance company.

"By keeping them out, I'm negotiating now for you," Altamirano said.

The doctor said he spends lots of hours visiting medical providers around the city to grow a network of labs and specialists willing to practice direct care. As of now, he and another primary care doctor as well as 12 specialists are part of the network.

"People are stepping up. Their altruism is coming out," he said. "If enough doctors do this, insurance companies are going to hurt."

More importantly, he said, it will alleviating pain for patients. By practicing the direct-care model, patients can receive medical attention without having surprise fees handed down by insurance providers, he added.

"That's the bigger picture here. Even if you are insured, don't use the insurance company for routine stuff. Don't include them and they won't make any money," Altamirano advised. "Find a primary doctor that does the direct-care model, and you're going to save." 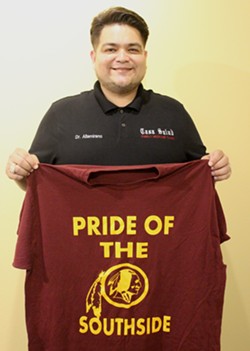 Though the practice cuts out insurance companies from taking a cut from covered patients' visits, it's also a safe way for immigrants to receive health care. Altamirano, a first-generation Mexican-American, said he especially wants to reach immigrant patients who don't have papers or insurance, since they usually think of medical care as something they can't take advantage of.

The doctor has been practicing this model for a little more than a month and is renting a space from another doctor's office as he grows his patient list and network of specialists. As of now, he sees patients on Sundays and select weeknights through his Casa Salud Family Medicine Clinic.

You can keep up with Dr. Altamirano through his clinic's Facebook page.