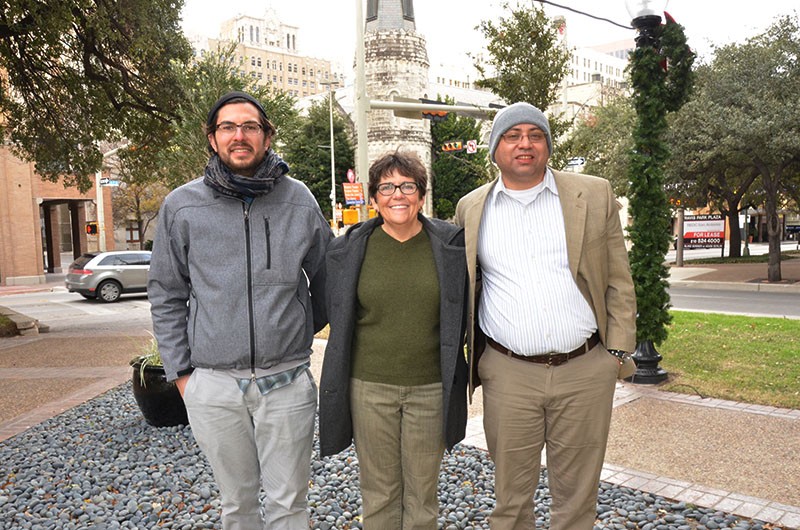 Sandra Whitley has known she was a lesbian since she was 13. Growing up in a small Panhandle town, Whitley remembers being mistreated by her classmates. It was 1975, and after a while, she lost friends and her school threatened to expel her. She thought about running away, something many gay, lesbian, bisexual and transgender youth are forced to do when things get bad at home after they come out to their families. Whitley understands how tough that can be. So last year she sold her business and now she has plans to provide a safe place for youth in those situations.

"I know what I experienced in 1975," she said. "Now, you jump 40 years and the problem is worse, as far as homeless kids ... I experienced a lot of harassment, so I know a little bit about what they're going through."

It's estimated that an average of 40 percent of the 1.7 million of the nation's homeless youth and young adults are LGBT, though data is limited. Here in San Antonio, volunteers and nonprofits that serve homeless youth think that number could be higher. Melody Bentley, with Stand Up for Kids, which provides basic essentials like food, soap and toothbrushes, as well as job interview tips to homeless youth, says that closer to half of the teenagers and young adults that her organization serves are LGBT youth who have left home because of rejection or abuse from family.

"The kids have come out, they've decided to tell their parents, who can't deal with it," Bentley says. "They have a preconceived notion that everybody is supposed to be a girl or boy, and they either throw the kid out or make life at home so miserable for the kids, trying to change them, that the kids leave home."

That's where the Thrive Youth Center, a homeless shelter for LGBT youth, comes in. Whitley, who serves as executive director, and Assistant Director Josh Yurcheshen want to provide a safe and judgment-free place for homeless LGBT youth to sleep at night. With rented space at the Travis Park United Methodist Church Downtown, Whitley, Yurcheshen and church member Joseph Tanasi plan to start small: Three nights a week, one of the three will supervise eight homeless LGBT youth, from 17 to 25 years old, overnight at the church's former day center for the homeless, which lost funding several years ago when Haven for Hope opened. The short-term rental agreement will last six months while Whitley and Yurcheshen find a permanent shelter.

"We first want the kids to have a safe place to be," Whitley said. "You can't expect somebody to even start thinking of what their dreams are until they feel secure, and feel secure with us."

The shelter was originally slated to open on November 18 of last year, but Thrive and the church ran into a bit of a technical hiccup with the City. After the Current's sister publication Out in SA profiled the forthcoming center, the City notified the church that it was not properly zoned to house individuals. Travis Park United Methodist Church, despite having provided services to San Antonio's downtown homeless for two decades, would have to be rezoned as a "human service campus" before Thrive could begin operating.

"Any church is a human service campus by definition," said the church's Rev. Pastor Dale Tremper. "To require rezoning for a church to do what a church does is odd."

City staff originally recommended against the church's rezoning request, citing a City policy intended to centralize services for the homeless at Haven for Hope on the West Side. However, with community support and the organization's strong case for filling a need, the Zoning Commission ultimately voted to rezone the church at its December meeting.

"The church is trying to provide a little bit of space for these teenagers who are not presently being served," said Mariana Ornelas, who represents District 1 on the zoning board and voted to rezone the church. LGBT youth are "not being served adequately, and that's why I voted to recommend rezoning."

Now the ball is in City Council's court. The council must decide whether to approve the zoning board's recommendation.

Lauryn Farris, a local LGBT activist who is also a foster parent, says Thrive will fulfill a tremendous need, as San Antonio's homeless LGBT youth don't have many options in the city. Haven doesn't accept teenagers under the age of 18 without a parent. Other organizations in town don't have specific accommodations or services for the LGBT community. The other local shelters, including Haven for Hope's Prospects Courtyard, aren't always the friendliest environments for the gay and transgender community. Transgender individuals have specific privacy and medical needs, but despite this and the potential for a hostile environment, they are sometimes housed according to their official ID or anatomical attributes rather than their gender identity. This can be especially traumatic for individuals who are in the process of transitioning.

Scott Ackerson, vice president of strategic relationships at Haven, said originally the organization's policy was to place transgender individuals in dorms based on the gender listed on their official ID cards. Now, he says, Haven staff work it out directly with the individual, giving them the option of female, male or single dorms.

According to the National Center for Transgender Equality, nearly one in three transgender men and women reported being turned away from homeless shelters because they are transgender.

"There are some additional needs that LGBT homeless need and additional guidance that is needed for those individuals beyond the services that are generally provided for the homeless," Farris said.

Whitley, Yurcheshen and Tanasi have a long-term vision for the center, which includes a day center with a full spectrum of medical and counseling services, an emergency shelter and transitional housing. They see Thrive as adding to the services offered for the homeless at Haven. Officials at both organizations confirmed that they are developing a plan to work together, which could include Thrive's permanent shelter being located at Haven.

Over the last few weeks, Whitley says she's received an outpouring of support and interest from volunteers. She also knows the need is pressing: She's already received emails from struggling youth, including a 17-year-old lesbian who is thinking about leaving home. Once the City approves the rezoning recommendation, Thrive can open as planned.

This story has been corrected to accurately reflect the City Council vote to rezone Travis Park United Methodist Church as a human services campus. The rezoning case is not on this week's agenda.