'Til the cows come home 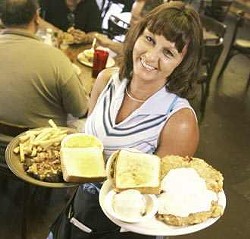 
With a cattle hide on his office wall, leather chair under his butt, and a half-smoked cigar in an ashtray, Mike McElreath gives off the impression that he has been around cattle since birth. Truth be told, he's more familiar with cooking beef than raising it: Before buying the Stock Yards Cafe, housed in the Exchange Buillding of the Union Stock Yards, he managed a Luby's and is still owner of the Buckhorn Saloon on East Houston. He has seen economic downturns, and this recent one doesn't seem to phase him.

See, the Union Stock Yards closed on April 18, 2001 (exactly 153 head of cattle were sold; compare that to a reputed high of 10,000 that passed through the sale barns one day in the '40s). As the lights went out on the last auction, most people thought the same would happen to the Cafe, a steak-and-eggs type of place that had been around as long as the 112-year-old yards.

Of course, owner Mike McElreath had no plans to close the home-cooking, lunch- and breakfast-serving joint. Although located a few hundred feet from the cattle chutes, the Cafe drew most of its clientele from the courthouse neighborhood farther up South Laredo. But add the fact that nearby Kelly Air Force base closed and business took an immediate drop, and the lunch rush isn't so rushed anymore.

"To this day, I still get two or three calls from people asking if we're open," said McElreath, a San Antonio native and Trinity graduate. "I didn't think any of it would affect me at all."

As smaller towns in rural Texas started holding their own auctions over the last few decades, the Union Stock Yards saw fewer and fewer ranchers travelling to what eventually became a congested San Antonio to sell their stock. McElreath said the herds were noticably thinning when he took over the operation five years ago.

"The last few years it had become more of a social place for old cattlemen. I think the owners felt a duty to keep the place open," he said. "It's a part of history that you don't see anymore."

What still remains are the meats, all cut on site, a homemade buttermilk pie, and potatoes mashed each morning. Manager Mike Kalmus said the mesquite-smoked prime rib is more than enough reason for stopping by on a Monday; I found the chicken fried steak reason for eating there the rest of the week. Crisp-fried and peppery (except one day when the meat was thin and breading too thick), the steak came topped with enough creamy — not off-puttingly gelatinous — gravy for the entire slab and was accompanied by two sides and buttered Texas toast. Try the green beans: They rock. The bacon-wrapped, smoked beef tenderloin available Fridays sounds sexy, too.

The BBQ beef brisket, tender, but not as flavorful as I had hoped, needed some steak sauce to punch it up. Sided by the toast, jalapeño rice, and pinto beans, the Tuesday lunch plate left me waddling, and satisfied, toward the door.

Kalmus and McElreath hold no illusions about their food: It may not be fancy, but everything that comes out of the kitchen — potatoes, pinto beans, or pies — is made from scratch. It's a challenge to prepare, but not as tough as trying to get people back into the Cafe's booths. McElreath has purchased advertising in newspapers and magazines and has produced radio spots, but found that walking door-to-door with menus has garnered his best response. "I'm in it for the long-haul," McElreath said, noting that he is focusing more on catering. "Hopefully the worst part's over."

Filled with the black-and-white photos of auctions, ranch families, and the yards themselves, the diner — like an unofficial museum — is keeping at least a small part of the area's 100-plus-year history alive.