Timmy! Tim Duncan Says He Will Return To The Spurs

He's back! NBA legend and San Antonio hero, Tim Duncan, will return to the Spurs for his 19th season with the team.

According to ESPN, on Wednesday, July 1, Tim Duncan stated, "Finally had a chance to talk with Pop. I'll be on the court next year." The news of Tim Duncan's return comes on the heels of the Spurs announcing that they have agreed to terms on deals with both Danny Green and Kawhi Leonard.

Coming off a season in which he earned his 15th All-Star selection, Duncan is going to have to continue to be an anchor for the Spurs in the post. Following the news that the Spurs traded center Tiago Splitter to the Atlanta Hawks on Wednesday July 1, ESPN announced that back-up center Aron Baynes has verbally agreed to a three-year with the Detroit Pistons. After the loss of Splitter, not only does Banyes' move to Detroit leaves the Spurs with only 35-year-old Matt Bonner, 33-year-old Boris Diaw, 27-year-old Jeff Ayres, and, of course, the ageless one, Tim Duncan, to play in the front-court, but it also leaves Patty Mills without a fellow Australian to play with. Poor Patty, what will he do without his soul-mate? Now he is just the Spurs' sole-mate. 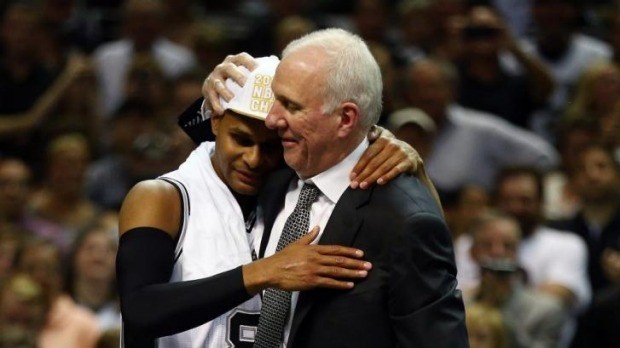 Despite the loss of Tiago, the departure of Aron, and the thought of a lonely Patty Mills towel-waving by himself in an empty arena for all of eternity, there is still reason for Spurs fans to smile. It is speculated that, in the usual Spurs' fashion, that Tim Duncan will take a discounted salary in order to help bring more talent to San Antonio. As of July 1, USATODAY reports that the Spurs are leading candidates to sign free-agent forward LaMarcus Aldridge. If signed by the Spurs, Aldridge will add youth and talent to the Spurs' depleted front-court. Perhaps, he could also speak with an Australian accent to make the transition a bit easier for Patty.

Either way, one more year of Tim Duncan is always a reason to smile.