To all the songs I’ve screwed up before 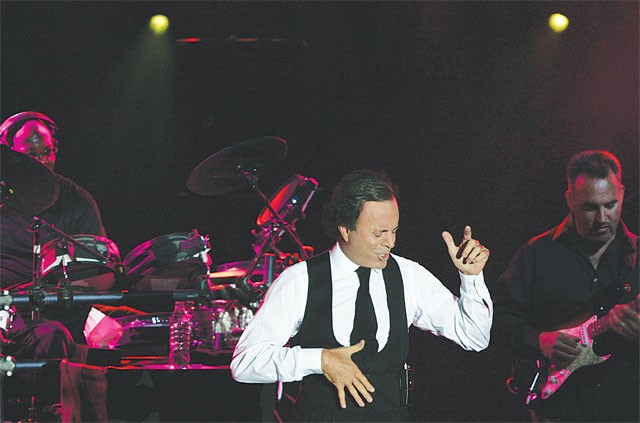 An Evening with Julio Iglesias

When Julio Iglesias’ PR people told me he would only answer questions in writing due to the fact that “he’s traveling in different time zones,” I was disappointed. In my 32-year career, no interviewee was ever funnier and crazier than Julio. I knew I had to ask him something that would force him to call me.

“Are you aware of the fact that most touring acts I interview call me from different time zones?” was my first question, followed by “Do you promise to be as much fun in writing as you are in person or on the phone?”

The phone rang a few days later. Julio was apologetic.

“I know you, but my PR people didn’t have the slightest fucking idea,” Iglesias said in Spanish from Punta Cana in the Caribbean. Despite his clean-cut, suit-and-tie look, Iglesias is a prankster at heart and never worries about “protecting” any image. “When I saw your questions, I told my wife, ‘Look, this is Lopetegui, the little fairy.”

That was my Julio. So, as usual, he starts by taking over the interview, asking me all sorts of questions, from the most personal to the most banal. He talks about soccer, family, and housing (“I was going to buy a house in San Antonio, but then I realized I don’t even have time to live in my own house.”). He finally asks, “What do you want to know?” and, for a second, I thought he was serious. I ask him whether this tour is more of the same (him singing the hits that allowed him to sell more than 300 million albums worldwide) or if there would be some new stuff.

“No, now I come out onstage naked,” he says, without missing a beat. He was on a roll. “The first half of the show I’m all dressed up, and the second part I’m naked.” Twenty minutes into the interview, he finally gets serious. “Soul-naked. I’m traveling with 30 people, many of them new. There are always changes. I have less hair and more desire to sing, but the same passion.”

And, according to him, he’s singing better than ever, and he’s not just saying that. He’s so convinced by the subtle improvements of his voice that — besides touring — he’s been hard at work for the last couple of years (and expects to remain so for the next year and a half) re-recording of all his hits for one or two albums to be named simply Número 1 (or just 1).

“I’m re-recording all the songs that I sang badly, meaning all of them, from [1969’s] ‘La vida sigue igual’ to [1996’s tango] ‘Uno.’” The first of those albums, which he is producing, will be released worldwide in September. “I’ve already recorded 60 and there are 60 left.” The final songlist is not ready, but “Hey,” “Nathalie,” “Abrázame,” and “Un canto a Galicia” are sure bets. Will he include “To All the Girls I’ve Loved Before,” his career-changing duet with Willie Nelson that peaked at #5 on the Billboard charts? He won’t say, but in an email sent after the interview, he praised the track and Willie.

“It’s a key song in my career, the one that opened the doors for me to the Anglo Saxon world,” he wrote. “I’ll be forever grateful to authors Albert Hammond and Hal David for having thought of me to sing it. … Even though it happened [in 1984] every time I sing it on tour I feel people dig it like on the first day. Besides, it was a pleasure working with Willie Nelson, an exceptional artist.”

In a career that spans 77 albums in 14 languages, Iglesias is one of the top 10 sellers in history. But there is one thing he hasn’t done. “I’d love to make a Christmas album in five languages,” he said, sending me looking for the nearest toilet bowl. “The most important Christmas songs in Spanish, English, French, Italian, and Portuguese. Twenty-five or 30 songs that define Christmas’ culture in the Western world.”

When I share my phobia for anything Christmas-related, he predicts: “Now that you have a daughter you better get into it. I know what I’m telling you — I have eight kids.”

And none of those kids is more famous than his son Enrique, the only singer he loses sleep over. “He’s the one [singer] I like the most,” he says. “Enrique is a champion, and he did it all himself.” (When Enrique told him he wanted to sing, Julio said, “Fine, but don’t ask me for any help.”)

Yes, he loves what his son does, but deep down he still feels he’s the best. At 68 (which he will be in September), he leads a disciplined life and keeps in shape, but how strong is Julio Iglesias’ voice, really?

“Don’t they say, ‘Gardel cada día canta mejor’ in your country?” He’s refering to Carlos Gardel, the greatest tango singer ever, who died in a plane crash in 1935. Tango fans always say “Gardel sings better every day,” even though the guy’s been dead for decades. “Well, the same thing happens to me, without false modesty. I know people are going to say it after I’m dead. So I just prefer to say it now, while I’m alive.” •