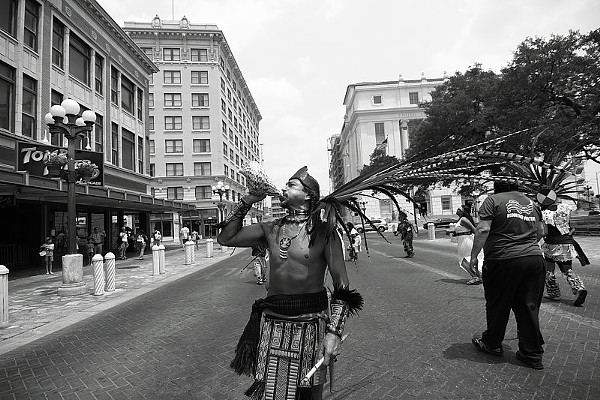 For more than a decade, Antonio Diaz pushed for city and county leaders to honor native peoples and recognize San Antonio's dark colonial past by declaring October 12 Indigenous Peoples Day. That's the day, as Diaz puts it, "Christopher Columbus arrived on the continent, parked his stupid ship, and then commenced with the destruction of our people."

Diaz, who founded the Texas Indigenous Council, thought he'd scored a hard-fought victory late last year when Bexar County Commissioners Court and San Antonio City Council finally named October 12 Indigenous Peoples Day. At least, he thought it was a victory until he started asking around to see how local leaders planned to commemorate the day this year.

Turns out they forgot about it.

When the city passed a resolution last November marking Indigenous Peoples Day, council members put out press releases cheering the designation. So this fall, Diaz started calling around to city officials, figuring they'd planned on somehow marking the occasion. He thought maybe they'd make a proclamation at a council meeting, on the steps of City Hall, or at least put out a press release celebrating the first-ever official passing of Indigenous Peoples Day in San Antonio.

A frustrated Diaz says he called the city clerk's office, which bounced him to another city staffer, who bounced him to the mayor's office, which never returned his calls. When we called the city on Tuesday, a spokesperson confirmed that, in fact, nothing was on the calendar to mark the occasion. They told us the city's Office of Diversity and Inclusion would make a Facebook post to make up for it. They also asked us for Diaz's phone number.

The response at Bexar County Commissioners Court was a bit different. Amy Putney, chief of staff for Bexar County Commissioner Tommy Calvert, who was instrumental in Diaz getting the day recognized by the county last year, said Calvert hadn't yet responded to Diaz's questions about this year's commemoration because he was out of town and "I haven't had a chance to discuss it with him."

Yes, Putney said, the county last year declared October 12 Indigenous Peoples Day for the first time ever, but that proclamation only said October 12, 2015. Unlike the city's resolution marking Indigenous Peoples Day on that date in perpetuity, she told us the county's proclamation "only covered that one particular day – last year." When asked if those types of proclamations generally have to be re-upped every year, she said, “That’s a hard question. I’d say that’s probably 50/50.” (Diaz says he had no idea the county's proclamation last year was only limited to one day.)

Diaz says he's particularly disappointed in local leaders' lack of attention even as indigenous rights have become part of the national news cycle, with native groups protesting oil and gas pipeline projects from Big Bend all the way to Standing Rock. Plus, he argues, indigenous groups deserve all the recognition they can get as the city prepares to celebrate its tricentennial. "Otherwise, we're just celebrating the destruction of our people and the taking of our land," he says.