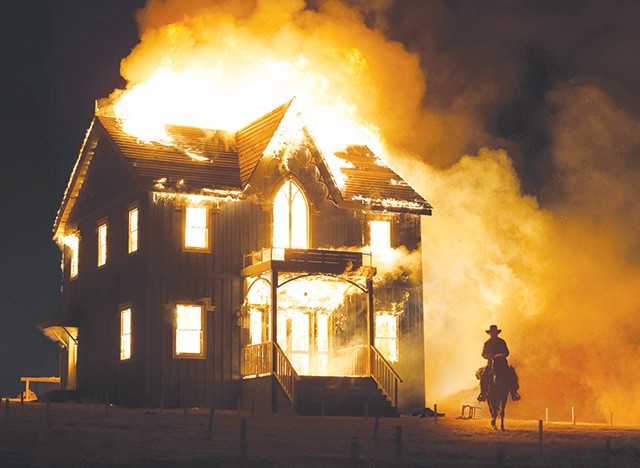 On May 18, Tommy Lee Jones’ The Homesman will premiere at Cannes International Film Festival, where it is in contention for the prestigious Palme d’Or prize, the festival’s top award. Though the competition is fierce (films by legends like Jean-Luc Godard and Mike Leigh are also in the mix) Jones has some precedent. The last film he directed, 2005’s The Three Burials of Meliquiades Estrada, was also nominated for a Palme D’or and Jones won for Best Actor while screenwriter Guillermo Arriaga took Cannes’ prize for Best Screenplay.

There’s a certain San Antonian who may be hoping history repeats itself, only with even better results. Wesley Oliver, a Pleasanton native who now resides with his family in King William, was one of three screenwriters for The Homesman, along with Jones (who also directs) and Kieran Fitzgerald.

Oliver, a lanky guy whose boyish looks belie the fact that he’s worked in the film industry for more than 15 years, spoke with the Current about The Homesman last week. “It’s a women’s movie [that] doesn’t conform to the Western genre,” he said. Oliver, who has worked for Jones and his production company Javelina Film Co. since 2005, has written five screenplays with the actor, but this is the first effort that will see a major international release.

The Homesman story comes from the award-winning novel of the same name written by Glendon Swarthout and published in the late 1980s. At its center is a trio of women in 1850s-era Nebraska territory, all driven mad by the bone-crushingly harsh circumstances. “It was a common occurrence,” said Oliver, “people went insane, disproportionately women, who bore a lot of responsibility.” He ticked off what women on the range confronted, “isolation, starvation, abuse, infant mortality … difficult winters, back-breaking circumstances. Sickness and death were all around.”

The three women, Arrabella (played by Grace Gummer, Meryl Streep’s daughter), Theoline (Miranda Otto) and Gro (Danish actress Sonja Richter) must be escorted to a sanatorium in Iowa, and the only person who accepts the job is “plain as a tin pail” schoolmarm Mary Bee Cuddy (played—marvelously well according to Oliver—by the decidedly stunning Hilary Swank). Cuddy then enlists a low-life claim jumper who owes her a favor (Jones, at his gimlet-eyed best, at least in the trailer) for the dangerous, difficult journey.

To create the screenplay, a task that had flummoxed earlier rights-holder Paul Newman, Oliver, Fitzgerald and Jones all took one each of the insane characters and spent the summer of 2011 crafting her backstory. They then spent a year weaving those narratives into the adventure tale of Cuddy and Jones’ character George Briggs crossing the plains. Filming began in March of 2013, primarily in New Mexico with a brief spell in Georgia. The cast and crew, which included Oliver, got a tiny taste of their characters’ hardship filming outdoors in 25-degree weather that included not only hail, sleet and snow but also dust storms with 30 mile per hour winds. “People were wearing ski goggles to work,” said Oliver.

As the American distribution rights for The Homesman haven’t been secured yet—a deal may await at the conclusion of Cannes this year—a screening wasn’t available for this article. However, the $16 million budget film anchored by two Academy Award winners and featuring a star-studded supporting cast hints at its craftsmanship in an international trailer released last month. This critic, for one, can’t wait to see the whole thing.