Mötley Crüe is celebrating 30 years of rock and roll with Poison and the New York Dolls. The show is Thursday, June 9 at AT&T Center (7pm, $25-$95 plus fees, attcenter.com).

A few days ago, drummer Tommy Lee spoke to the Current on the phone from Dallas. 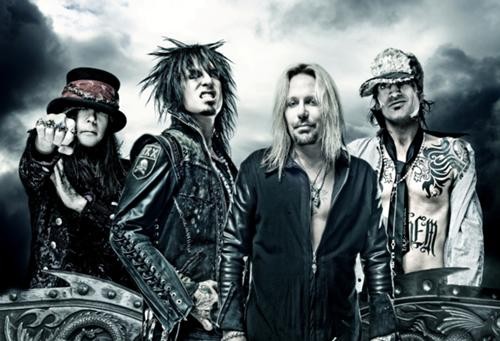 It hasn’t started yet. We’re in the middle of pre-production, working on the new set, the dancers, a 360-degrees drum roller-coaster and fucking you-name-it. It’s insane!

You don’t even know!

[laughs] I guess it is

What’s the secret, man? You guys have been through it all, and you’re still standing.

I don’t know if there is a secret. I was just telling somebody else that what’s really cool, one of the exciting things about now is to look into the audience when we’re playing and

You know, when we were coming up, you’d look into the audience and there were all people your age. Now, you see people your age with their kids. There’s a whole new generation of kids wanting to see us. That makes me very happy, because it’s a nice sign that lets you know you’re going to be around for a while. That’s really cool. But it doesn’t feel like 30 years. That really stupid cliché of “time flies when you’re having fun

Oh, yeah, of course! I guess that’s true to a point. The other cheeseball cliché is that “some things never change,” and that’s true too. We’re older and wiser, but we’re still fucking retarded. You know what I mean?

But not to the point of throwing TV sets from the hotel window, like you used to

Yeah! We still do that dumb shit, you know? We still get in trouble, we still have the big parties after the show backstage, and we still do a lot of the same dumb shit. Sometimes I think we’ll never grow up, and that’s fine too. It’s a nice balance: some things haven’t changed, and other things are

What’s the latest craziest shit you did?

Flying around upside down on a fucking roller coaster trying to play drums. [laughs] Last night.

Yeah! The drums are on a rollercoaster.

Yeah, fucking insane, dude! The road crew guys are looking at me and saying, “Dude, you’re out of your fucking mind! What is wrong with you?”

So describe to me the stage: you mentioned the dancers, the roller coaster

What else is there?

There’s everything, man! Everything you ever wanted to see is going to be there. Trust me. I don’t want to mention everything. Fuck it. It’s just so loaded with so much fun shit. It’s going to be a fun summer, let’s just put it that way.

When you released Dr. Feelgood you said it was the best album, because you were all sober when you did it. I don’t know how sober you are now, but you’ve been on both sides, so let me ask you: can you still make good music without any shit? If you can do it sober or high, what would you choose?

That’s an interesting question, because you can make pretty wild music both ways. I don’t know if that’s going to be easy for me to answer, because we’ve done it both ways, and they’re both good and they’re both different. It depends of what you’re after, what kind of vibe you’re looking for, what kind of sound, what’s inspiring you, you know? That’s a really hard question for me to answer.

OK, answer this: when Vince Neil left the band in 1992, did he quit or was he kicked out?

I don’t even remember, and I don’t think it’s even important.

Well, it is important for me. It’s history. What’s the big deal? The official story is that he quit, but he said he was fired. So what is it?

I think at that time we weren’t getting along with Vince very well and he wasn’t showing up to rehearsals. If I remember correctly, we

we were going to look for another singer. And that’s when he walked out. So I guess we sort of inspired it by saying, “We’re not happy, we’re having a new lead singer.” And he said, “Well, fuck you, guys

I’m out of here.” So I think what went down was truthfully a combination of things. We weren’t happy and he bailed. That’s the truth of what really happened, but everybody will give you a different version. “He quit.” “No, I was fired!” But, really, that’s what really happened. [laughs]

What’s up with The Dirt, the band's documentary?

We don’t know yet, we’re meeting with a bunch of guys. Hopefully we’ll have some information soon. I hope we get it going by next year, you know?

But is anybody shooting anything?

The fans chose the bands you tour with and the songs you’re going to play. Are you happy with their selection?

Yes. They’re coming to see you, so you might as well play what they want to hear. Just when you think you know what the fans like, you know

sometimes you don’t. Some of the songs they pick we never play live. There were some bizarre choices, and that’s cool.

How many times have you played in San Antonio?

So many times. I love it there, man. Just a cool vibe. Texas has always been good to us. And San Antonio has a good vibe. I always head down to the Riverwalk. It’s so beautiful to have a river running through the middle of the city.

And you can walk there, just like that? The people let you?

Hell, no! [laughs] I end up going for a little while and then head back to the hotel. But I always try to go, because I think it’s just so pretty. It’s gorgeous. Nice vibe, and the people are cool.

You’re a big Queen fan, but Queen is a band often dismissed by metal-heads. Did you know Queen’s first five albums have been re-mastered and re-released with bonus tracks?

Wow! Fuck, they’re amazing, man! And it’s cool that they've re-mastered and re-released those records. I had the pleasure of meeting all of those guys. It was a band that really influenced me growing up. I like them a lot. Their drummer sang and inspired me to sing. A very talented group of guys.

Besides the singing, did Roger Taylor influenced you as a drummer?

Yeah, he did, maybe not so much in his technical playing, but in terms of sound and how he played into the music. He’s an all-around talented drummer.

Are you still associated with PETA? Are you a vegetarian?

I still help those guys, but I’m not a vegetarian. I tried to go vegetarian for a while and I did pretty well for about a month and then

I found it very difficult to stay vegetarian. I got bored with eating vegetables only. Shit, and when a couple of guys showed up eating hamburgers and shit I went, “Oh, man!” But my girlfriend is vegetarian and, to tell you the truth, I’m eating less meat. We cook together and I don’t cook meat, because she doesn’t eat it. So I’m eating a lot healthier, for sure.

You got a lot of flak for wearing a tattoo of a swastika once, but I just want to set the record straight: the swastika symbol has nothing to do with the Nazis. It is actually a Hindu symbol that Hitler altered and adopted as his own.

Thank you! Hell, no! As a matter of fact, it’s a Buddhist peace symbol [it is also used by Buddhists, but its origins are Hindu]. I got so much flak I just covered it up. Lots of ignorant people out there. It’s a fucking swastika, but if you flip the symbol around it looks like [a Nazi symbol]. I just said fuck it, and I covered it. But I’m definitely not a Nazi. No fucking way.