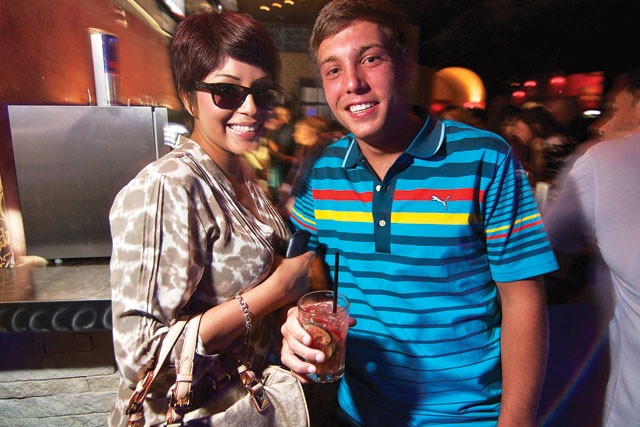 As of this writing, San Antonio Spur's point man Tony Parker is recovering from eye surgery he received in France that is directly linked to a low point at a high-end Soho basement bar called W.i.P (Work in Progress). Chris Brown's entourage apparently ran afoul of Drake's people at this Factory-inspired dungeon, and bottles were thrown. On the eve of embarking on some overseas summer basketball, Parker, who was at his own table, got some glass in his eye and has decided to sue the club for 20 million bucks.

It's a pretty safe bet that you're not going to run into this kind of expensive TMZ-styled drama at Parker's own place Nueve Lounge.

Located across from the Dominion Country Club, and saddled in the same Leon Springs shopping plaza as Double Dave's Pizzaworks, there doesn't seem much chance a customer will get hit in the head with a bottle of Cristal over Rhianna anytime soon. But if said customer is up for paying $200 for a VIP bottle of Cîroc and is happy sitting on airport lounge quality upholstery before wall designs that resemble Edwardian book covers, then that person is in for a real treat.

There is a decidedly subdued retro feel to Nueve Lounge; the kind that exists, say, as the backdrop for that SNL "Ladies Man" skit; but it really does feels like a lounge, feels like you should be able to hide out for a bit in the late afternoon while your better half does some H-E-B shopping, and before the pretty people come in to shake it till 2 a.m.

Renovated out of what was once Chango's Havana Club, Nueve Lounge has a walk-in humidor that you, of course, are not allowed to smoke in and a neat patio area where you may thankfully puff away. There is valet parking too, if you can't find a space at the adjacent drugstore. And there is a dress code: Guys here all seem to wear low-buttoned, untucked shirts with khakis while the women mostly look like they missed an award show. Age range goes from barely legal to retired basketball player.

The one thing that kind of throws you off the look of the lounge are the digital art images of Tony Parker in dunking action, which come off like Front 242 posters hung around a lost dream sequence to Cooley High.