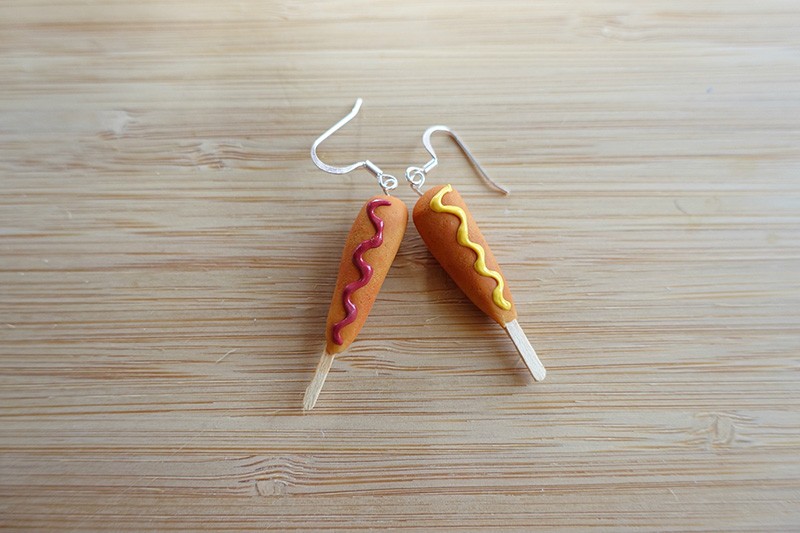 When Nicole Gonzalez set out to find her way in life after graduating from Taft High School, the San Antonio native decided to try her luck at baking. But the fan of sweet desserts and generally cute treats had a hard time actually enjoying the work.

"I kept going back to painting and sculpting here and there," said Gonzalez, 26, who dabbled in art classes while in school.

After watching a YouTube how-to video on working with polymer clay, she found a way to still bake while putting her love of art to use.

The business started with a few cupcake varieties, frosted donuts and syrup-drenched pancakes, all sold through Etsy, but its portfolio has since expanded to include several South Texan favorites.

"The conchas and the pizza are best sellers," Gonzalez said. Available in four colors, mirroring flavors of conchas, the pieces are about the size of a quarter. Conchas takes about 10 minutes to make and when they're set they're baked in a small convection toaster oven that Gonzalez uses to temper the teensy pan dulce (for all intents and purposes, a regular-sized oven can also be used, but that would be kinda goofy).

"I've gotten used to making them, so I can narrow down the process," Gonzalez told the San Antonio Current. She uses a slew of clay tools, along with fondant cutters and rollers, to shape her products and then adds texture with sandpaper. She uses her days off from her job as a kennel technician to beef up her inventory, usually making about 10 one-inch pieces a day in advance of big fairs or events. Pizza, on the other hand, is a more tedious, time-consuming design that requires several layers (dough, cheese, toppings).

Though Gonzalez has been making the tiny wearables for two years, business picked up last year when she started a separate Instagram for her business. "I bet people were glad I stopped spamming from my personal one," she quipped. It's also easy to see improvement in her pieces with the use of new techniques from just a year ago.

Her busy season, unsurprisingly, is Christmas (October through December are particularly nutty) and Fiesta.

Aside from conchas, other regional food items help set Sweet Craft Jewelry apart from other Etsy vendors. Where else but South Texas can you find a bean and cheese taco necklace to finish off a Fiesta outfit? Her most recent creations include avocado halves, red and green jalapeños, empanadas, marranitos or chili-covered mango and watermelon lollipops, all of which are packaged and shipped to Europe, Australia, Canada and all over the U.S.

Gonzalez experiments with special requests, resulting in Paleta Payaso pieces, Choco Tacos, Cadbury eggs and Piccadilly miniatures, but not all experiments end up being made by the dozen. Hints of perfectionism show as she talks about trying to get the cheese "right" on her trial bean and cheese tacos.

"I've done pies in the past, but it's a little difficult to get the layers and fruit and filling right and making sure it keeps that pie shape," Gonzalez said. Turns out that much like their edible counterparts, you can't control what happens to polymer pie once it hits the oven.

Though challenging, she's cool taking on those special requests — to an extent. She does have limits.