Tool Top Ten: The Current Ticks Off Our Favorite Tracks Before the Band's AT&T Center Show 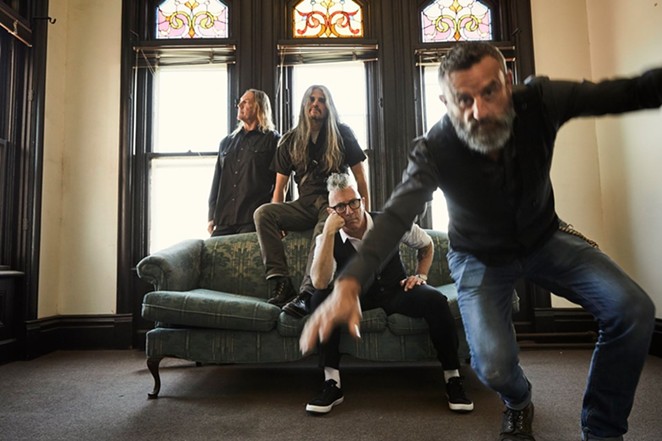 Iconic prog-metal band Tool will perform at the AT&T Center on Friday, October 25, in support of Fear Inoculum, a new album it dropped at the end of August.

With the group's entire catalog finally uploaded to streaming sites such as Spotify and iTunes this summer, we cycled back through the band’s catalog and jammed out to tunes both old and new.

Here's a list, in no particular order, on 10 tracks we hope Tool performs next week. Yeah, we know they’ll probably focus on stuff from their new album. But who knows, we could get lucky.

This tune's staggering opening bass line gets us every time. And while 10,000 Days isn’t our favorite record from the group, "The Pot" has all the elements of Tool we appreciate: unexpected rhythms and transitions, singer Maynard James Keenan’s interesting choice of vocal melodies and electric guitar transitions that veer into post-rock territory.

The perfect opener for Tool's most psychedelic album, Lateralus, “The Grudge” seems to fold into itself before breathing and expanding into an entrancing track. You don’t need acid for the trip that this tune takes you on.

“Hooker with a Penis”

Just hearing Keenan tell this story about a fan calling them out for “selling out” is hilarious, and the way he describes the dude really captures the ’90s alternative bro look. Vans — check, Beastie Boys T-shirt — check, new tattoos — check, nipple rings — check.

It’s not every day that Tool throws a recurring thrash guitar riff into the mix. But on “Jambi," that approach fits, adding just the right texture to the song.

“Parabol” and “Parabola” should be one song since the tracks blend into each other seamlessly. But since we can only have 10 songs, we'll go with the latter. On this six-minute banger, Keenan gets metaphysical on our asses with lyrics like, “This body holding me/be my reminder here that I am not alone/feeling eternal all this pain is an illusion.” The song’s message seems to be that we’re spirits in bodies with only a limited time on earth. The hardships and trials we face aren’t going to matter since our spirits won’t die. Or something like that.

Nine minutes and 22 seconds may seem like way too much time to invest in listening to a single song, but the cosmic journey Lateralus' title track takes us on is worth the time. So the story goes, once the band members began counting out the timing for the song, they realized they'd unconsciously been writing in the Fibonacci Sequence. The sequence is numerical pattern that exists in nature, including sunflowers and the human face. You can hear Keenan explaining it here.

This is pinnacle '90s Tool at its best. Catchy riffs, heavy builds and a drum solo that sounds like Danny Carey is going to break into another dimension as he pounds the skins. Few bands on the radio at that time were exploring the kinds of time signatures and polyrhythms these dudes were.

It’s not like Tool was the first band to recognize the end times we’ve been living in, but it sure put together an amazing track inviting a tidal wave to level Hollywod and California in general.

While the new album is still growing on us, this particular track — a monstrous 15:44 stretch — encapsulates the Tool's current strengths. Basically, “7empest” is the perfect summation of the band’s 30-year career.

And how could we forget the EP? “Opiate” was our first taste of Keenan making it known that he's not a fan of Jesus or any of his followers, a theme he's carried not only through Tool’s catalog but that of A Perfect Circle as well.

Tickets are still on sale for Tool's October 25 show at AT&T Center.