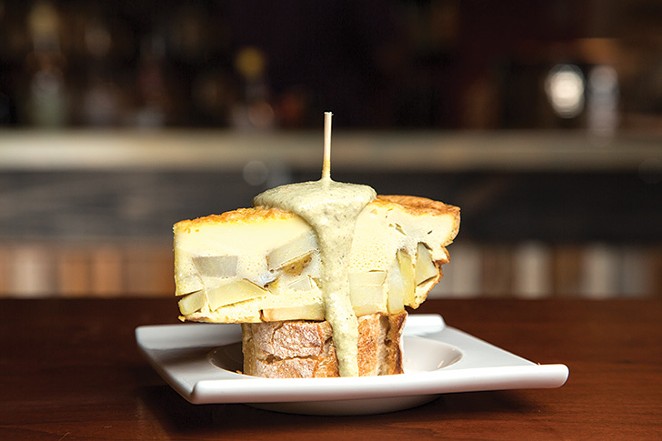 At 40, Jason Dady most definitely still has some tricks up his sleeve. And he knows San Antonians love a tipple or two or three …

After announcing the opening of The Bin in mid-September as a way to bring back the Artisans Alley eatery he opened in 2006 only to close it later to make way for Umai Mi, Dady and co have delivered a new concept to the area. Who knew we needed a chill, mostly inexpensive and authentic tapas bar?

And unlike his other efforts with specific audiences, The Bin is laid-back and staffed by knowledgeable employees who will help you achieve any task at hand whether you’re hoping to have a few snacks before heading out for the night or you’re looking for a cozy date night spot or you’re in search of a place for a few pals to share a couple of wine-filled porrones with.

Visits (and there should be multiple) to The Bin must include an assortment of bites. Broken down into small, medium and large tapas, the menu includes deviled eggs, olives wrapped in piparra peppers and anchovies, a tortilla Española with crunchy potato chip bits, Spanish olives, stuffed piquillo peppers and mini baguette sandwiches.

You’ll want to double your order of the grilled goat cheese sandwiches with tomato jam (a crossover item from Bin 555) because sharing won’t be an option. The Spanish octopus, with extra virgin olive oil and smoked paprika is also a must, and if you’re feeling the treat-yo-self spirit, an order of thinly sliced Iberico or Serrano ham is also in order. Split a porron, order the Jose Andres G&T or the grapefruit variety and enjoy. It’s not a ticket to España, but it’ll most certainly do. —JE

This October San Antonio gained yet another bakery. But where we’ve got plenty of panaderias and a few French bakeries already filling bellies, a hole remained to be filled. These days, we’re filling it with assorted baklavas from Baklovah Bakery.

Opened by the same owners as Pasha Mediterranean Grill (multiple locations), Baklovah Bakery sits in the same complex as sister eateries Pasha and Naara, and Ali Baba’s International Market. In case your sweet tooth strikes after noshing on hummus and kebabs or after finishing a hookah, make your way over to the gleaming bakery. What lies before you are several cases worth of Mediterranean baked goods, and you’ll want to show restraint or risk blowing your budget on dessert.

There are oodles of cookies to choose from — grab a few of those for your morning coffee. A case of almost-too-cute mousses, cream puffs, large macarons and opera cakes Pick up a few of these too, as flavor combinations change often (the traditional chocolate and matcha lime shouldn’t be missed).
But the stars of the show are in the large display case in the corner. One look at the spread in front of you is euphoric and overwhelming at once. Choose between Turkish baklava nests, walnut baklava, pistachio baklava or rolled pistachio lady fingers so dainty you’ll wonder who’s tasked with coiling these two-bite cuties. Asked for a warmed kanafeh, a cheese pastry delicately bathed in rose water for an extra special treat. –JE