Top 5 Down the Hatch Cocktail Recipes of 2013

December 19, 2013
comment
Our house bartender shared plenty of great cocktail recipes this year. Whether they was seasonal favorites or local takes on classic cocktails, Jacob Coltrane Burris shared the boozy gospel along with tips on how to make these concoctions at home. Here are our top five picks for 2013: 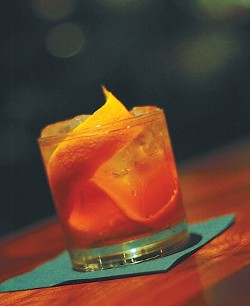 Let’s just say Ian Fleming, James Bond’s creator, referred to it as “The Drunkard’s Drink.” It is easy to make and refreshing, consisting of brandy, lemon peel, bitters, and ginger ale, a simple cocktail for those slow, simmering summer days.

An orange peel (try and peel the orange a few times around, into a spiral)

Stir everything into a rocks glass with ice. Fill with ginger ale (preferably Schweppes or Fever Tree).

From the write up:

I order a drink that best reminds me of Saluté’s spirit: something strong, spicy and unapologetic. It has plenty of kick up-front, but trust the Sprite to calm it down after the first few sips.

Shake ingredients and pour into an ice-filled Collins glass.

Garnish with a cilantro sprig.

*Stick the infusion ingredients into the spirit and let it sit for a week. To make a gentler infusion that wouldn’t be as abrasive when taking it as a straight shot, throw in some simple syrup. Strain before mixing and serving. Alternately, skip the infusion by muddling 4-5 serrano slices with a handful of cilantro in the shaker before adding the rest of the ingredients to shake. Strain before serving. 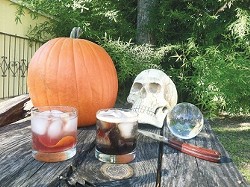 Stephan Mendez made this for me at Blue Box [where Burris works]. It’s a deceptively smooth drink hiding ill omens. A familiar favored by witches and demons.

Combine Cruzan Black Strap Rum and pumpkin spice in an airtight container. Give it a good shake and let mixture sit overnight. Strain the mixture using a coffee filter or cheesecloth.

In a saucepan, combine water, sugar, cinnamon and vanilla. Bring to a boil and simmer for 5 minutes. Let mixture cool and strain using a cheesecloth.

4. A Pear and Pama Aperitif

The first cocktail is meant as a nice, dry, pre-dinner drink, to spark the appetite. The pear and pomegranate pair nicely together with the Champagne. Take care to not have too many of these before the feast even begins.

I have to make assumptions about you, gentle reader. I have to assume that you will, at some point, be sick and feverish, or lonely and cold, or happy and in good company, maybe all these things at once. Maybe you will find yourself standing in a room full of people you’d rather not be standing in a room with, wearing a garish sweater you’d rather not be wearing, listening to Gene Autry’s “Here Comes Santa Claus” one too many times, near a dead tree that’s covered in cheap glass, all the while looking for some way out, searching for some escape into the serene oblivion. While I cannot offer you such an escape, lovely reader, I can offer you the next best thing to the abyss: booze.

Cinnamon stick (and/or nutmeg, if desired)