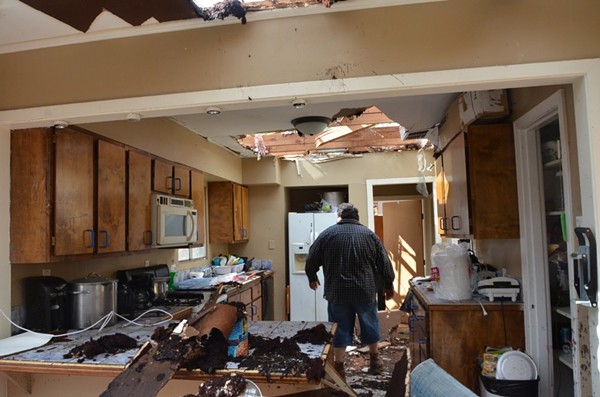 When Lisa Leahy opened her door early Monday morning, she didn't know what to expect. Leahy had spent the night fumbling to triage the damage inflicted on her Northeast Side home by one of four tornadoes that hit Bexar County last night, with only a flashlight to guide her. Leahy, like most of her neighbors, was waiting for the light of day to take a serious look at the scene.

"It felt like the Twilight Zone," said Leahy, who lives directly across Highway 281 from the Alamo Quarry Market. "I opened the door and just stared. It didn't look like my neighborhood."

Her fellow neighbors had the same expression on their faces as they surveyed the damage. "Just in a daze," Leahy said.

Aside from her windows shattering from the tornado's gusts and her backyard greenhouse being, well, nowhere to be found, Leahy's house was left relatively
undamaged. Many of her neighbors were not so lucky.

At least 40 houses in her neighborhood — particularly on the blocks of Linda, Skipper, and Sharon drives — appeared to be totaled. Roofs were ripped clean off and tossed onto a neighbor's house a block away. Old, knotted trees were resting in living rooms, split like a banana peel, or uprooted and dragged across car windshields. Pink clumps of insulation dangled from branches like cotton candy.

"Who's chair is this?" One neighbor yelled down the block, hoisting a green folding chair that had appeared in her backyard. No one knew.

Few residents saw this storm coming — let alone the tornadoes it brought with it. Sometime around 10 p.m. on Sunday, a few people got an alert on their phone: "Tornado Warning. Take Shelter Now." Minutes later, something that sounded like a speeding fright train crashed through the neighborhood, bringing with it gusts as high as 105 mph along its 4.5-mile path.

Now, friends, family, neighbors, and city workers are scattered across the neighborhood, helping cut down cracked tree branches and salvage items from soggy, splintered homes. Kids, out of school for President's Day, tossed branches into piles. Others walked down streets with a red wagon, handing out free tacos.

Local state Rep. Diego Bernal drove down to San Antonio from Austin as soon as he heard the news; his godson lives in one of the houses hit the hardest by the tornado.

"I want to be the most helpful I can right now, whatever that looks like," Bernal said. He plans on calling local hotels to ask them to donate rooms to residents that have been abruptly displaced. At the moment, a few churches have opened their doors to the tornado's victims, and the American Red Cross set up temporary shelter at the Blessed Sacrament School.

For many of those suddenly without a home, close friends and family members have offered temporary living situations. Many people expressed relief for buying "that expensive insurance plan" years ago (now it would help them buy a new place). But not everyone is that lucky. For Adrian Venegas, who was sitting in his living room when his roof ripped off, finding a new home isn't going to be easy.

"We just moved here from California," said Venegas, who lived in his Linda Drive rental with his wife and four children. "We don't have family here. For us, that means we're headed to the shelter."

His living room is now carpeted with chunks of plaster ceiling tile and dirt. The couch cushions are bloated with rainwater. Even his family's minivan was hit, smashed under a tree on the street. All his family's pets are missing. Will he be able to salvage anything?

"Nope," he said. "We're going to have to start from scratch."