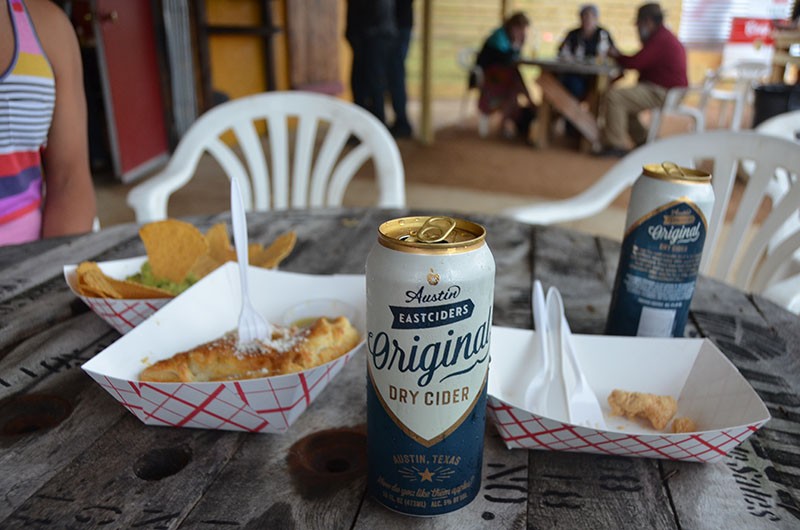 Picture this: Two local chefs leave town in their mid-20s to hone their culinary skills, work with at a slew of prominent eateries and then they make their way back to SA, open up a small place and make fun bar snacks and drinks.

That's the plan chefs Josh Cross and Rick Frame have in opening Toro Taco Bar at the intersection of Brooklyn and Austin. The joint is fashioned after icehouses of yesteryear and popular watering holes in the area that make for fun hangs come summertime.

"We wanted to take back the space to what it once was," Frame said during a break from building the patio's wooden furniture. "There were restaurants down here, bars down there and then it became industrial."

As the fourth business to move into the Dignowity Hill neighborhood (Dignowity Meats, Alamo Beer Company and Big Hops Growler Station "The Bridge" have all opened within the past three months), Toro Taco Bar is looking to add to the landscape with simple fare and drinks.

Cross and Frame's story goes way back, much earlier than their March opening. The two young chefs met while working inside the original Restaurant Biga on Locust Street. For Cross, his culinary path took him to a café with Damien Watel (now the home of Paloma Blanca), and Polo's at the Fairmount under chef Mark Collins. Cross then spent eight years in New York City, working in kitchens like Gramercy Tavern and Jean-Georges, while also working under James Beard Award winner Alain Ducasse. After moving back to San Antonio in 2006, Cross helped open The Grill at Leon Springs under Thierry Burkle and Armand Obedia before rejoining Bruce Auden at Biga's new location on the River Walk. He left to open Oloroso in 2008, and when it closed its doors, Cross made his way to Oregon to do some consulting.

Frame, the slightly more outspoken of the two, worked as sous chef for Mark Bliss at Silo Elevated Cuisine for a couple of years before taking on NYC, where he worked at the recently shuttered WD 50, a lower eastside institution for modernist foods. Frame eventually made his way to Hawaii to work under celebrity chef Roy Yamaguchi.

The pair reconnected recently after Cross' return during the Wicked Night at Wickes feast, with mutual friends Robbie Nowlin and Jeff Wiley of Citrus at Hotel Valencia.

"It's kind of double trouble, man. We kind of agree on everything, which is great," Frame said of the serendipitous partnership.

The gelled vibe works especially well in the kitchen as the duo works to create a simple menu of tacos (look for street-style pork), quesadillas (a huitlacoche and calabaza was mentioned) and a goat pop tart (cabrito with mushroom and poblano).

"We're going to try and make the most delicious snacks as possible, but serve them in paper plates and cups to keep things affordable," Frame said.

The joint features an ordering window and more than a dozen seats along the indoor bar. The outdoor furnishings were mostly built by Frame, this includes what will be a planter garden and stage, which will serve as more seating when bands aren't featured.

On the drink side of things, patrons can expect to find a selection of rum and agave-based drinks (all fashioned by Cross and Frame). Beers include South American, Mexican and Texan craft brews. Cross will curate a small and revolving wine list — dictated by what people are drinking and area weather patterns, so plan to get your rosé on come summer. And as for jams, Cross and Frame will only feature San Antonio and South Texas artists on their sound system.

"We're trying to create a really comfortable atmosphere — keep it San Antonio, keep it South Texas and make it accessible for everybody," Frame said.

Don't expect the vibe to be anything other than chill — both chefs are wearing shorts behind the kitchen doors.

"We've always had to work playoffs and now I'll get to watch from behind the bar," Cross said.

"The bar's on our terms — we've both opened up other places here in town with help," Frame said. "This is ours and we're swinging for the fences."