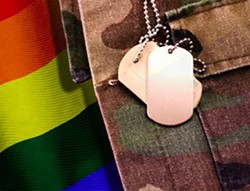 The Old World far outpaces the New World when it comes to transgender inclusion in the armed forces. A new study released by the Hague Centre for Strategic Studies ranked 103 countries based off of policies and treatment of transgendered military personnel. You can read that study at the bottom of this story.

The United States ranks 40th, but it is described as an outlier, along with South Korea (73rd), China (62nd) and Japan (29th). "These countries score higher for Human Development or Democracy than they do for LGBT inclusion in the military.

As a result these countries may be ready to join a dialogue on policy and practice associated with greater LGBT inclusion," the study states. An outlier is data that is abnormal or not explainable within normal parameters, which indicates error or a flaw in theory.New Zealand tops the list, followed by the Netherlands, United Kingdom, Sweden, Australia, Canada, Denmark, Belgium, Israel and France and Spain, which tied for the tenth spot. And yes, you read that right, Israel, the country that religious conservatives in the United States rally around supports LGBT inclusion in its military.

We'll be interested to see whether that support wanes when those folks weigh Israel's inclusive nature with right-wing anti-LGBT values.Anyway, according to another study, this one by the Palm Center, the United States will likely allow transgendered individuals to serve openly. The study estimates that 15,000 active military personnel are transgendered.

The report, which you can read here, offers the military practical ways to change and tweak policy, allowing transgendered military members to openly serve.The United States' most famous transgendered member is in prison for leaking classified documents, including a video of U.S. soldiers gunning down innocent civilians and a Reuters journalist during the Iraq War, to Wikileaks.

Chelsea Manning, formerly known as Bradley Manning, announced her transition a day after being sentenced to 35 years in prison for espionage. In September she filed a federal lawsuit because the military denied her access to medical treatment for her gender disorder.

But that's military policy. Medical treatment for gender disorder is prohibited. And according to the Palm Center, that's one of many anti-transgender policies that needs to change.The Human Rights Campaign, reacting to the Hague study, called on the military to set an example."Unlike like the statutory bar that prohibited lesbian, gay, and bisexual service members from serving (known as “Don’t Ask, Don’t Tell,”) the ban on transgender military service is regulatory and only requires action by the President as Commander-in-Chief and the Secretary of Defense.

As American society continues to show greater understanding of the unique challenges o f the transgender community, the military has the opportunity to lead by example," HRC said in a blog post.