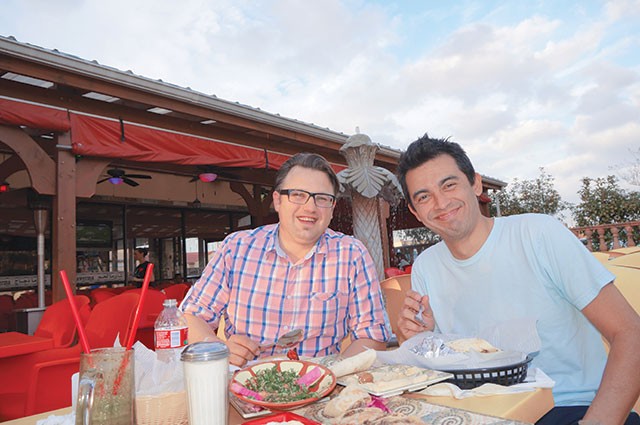 To the possible curiosity of the local public and likely general annoyance of other food critics, the Travels with Frenchie power trio returns after a four-year hiatus to further traverse the local hinterland in search of interesting dining experiences. As before, the culinary vice squad includes Fabien Jacob, aka Frenchie (now a Certified Sommelier from the Court of Master of Sommeliers), Carlos Montoya (an award-winning, evidence-based bicycle mechanic and gourmand of grilled meats), and myself, a travel writer, who until recently hadn’t been doing much traveling or writing.

When we last retired, the local food scene was on the verge of a transcendent explosion. At that point, the Pearl Brewery had not reached its current zenith and food trucks were like mythical white buffaloes (though now have become so commonplace they elicit rarely more than a yawn). Nonetheless, the city is awash with just enough cash to keep the food scene progressing forward into what we surely must consider a Golden Era. With oil money from the south of town, tourist money from Downtown and narco-laundered money from the North Side all fueling San Antonio’s growth, the dining scene and our collective bellies continue to expand.

The kernel for this dining adventure began at my day job in the Medical Center as I was talking to an Iraqi refugee. While trying to simply build patient rapport, I started a discussion of the best Middle Eastern food in town. I had always maintained that the best in SA was Jerusalem Grill, without question. However, I was strongly led to believe that Shisha Cafe should be considered the true nonpareil.

We arrived on an early Saturday evening. The sun was still setting. The night was just beginning. And unfortunately, the waitstaff was still trying to get out of first gear. To give some context, Shisha Cafe started about 10 years ago primarily as a restaurant but over the years has morphed into a hookah lounge that also serves food. And because of this duality, Shisha keeps fairly long hours and most likely peaks during the wee hours.

We ordered a few goofy drinks to begin: a tri-colored fruit smoothie served in three distinct layers, and mint lemonade. The smoothie was a whimsical choice by Carlos and he was pleased. I imagine it will be even more appropriate come summer. I tried the mint lemonade and it, too, was served more like a smoothie with green, sloshed herbal ice served atop the more tart lemonade below. Both were fresh and refreshing.

We next tried a staple combination of Middle Eastern appetizers: hummus and tabbouleh, married together like peanut butter and jelly. These two together are one of the best vegan combinations ever created. The hummus was smooth though perhaps a bit mild. With the addition of some olive oil, its flavor became more complete. The pita bread was surprisingly soft. It didn’t seem to be baked at the high heats one might usually expect, but its soft pliability gave an unexpected advantage for dipping. The tabbouleh was fresh and tart but was chopped very coarsely with large chunks, which left more on the tongue than one would probably like. But to put this into context, the tabbouleh was still leaps and bounds better than the typical American hippie-style that weighs too heavily on the bulgur wheat (though with the anti-gluten movement now becoming so commonplace that even Fox News feels safe admonishing evil grains, perhaps that hippie’s days are numbered.)

The main course consisted of beef shawarma, chicken shawarma and lamb tikka. Without question, the beef shawarma was the best of all three. Cinnamon and other earthy spices gave the beef intoxicating warmth, while a yogurt sauce on the side added a refreshing coolness. The chicken shawarma was very moist according to Frenchie and lauded by Carlos as well, though still a distinct second to the beef. The lamb was an also-ran compared to the others though Frenchie felt it had great flavor but just wasn’t a very good cut. Carlos wondered aloud if there might be some connective tissue or membranes contributing to the gristle.

While we slowly exited, more and more hookahs were being ordered—surely the way to best capture the Shisha experience. Jerusalem Grill is still the sultan of the city, but Shisha offers a patio experience with a casual and festive touch that is worth a late-night trip.