Travels With Frenchie: The trio takes on B&D Ice House 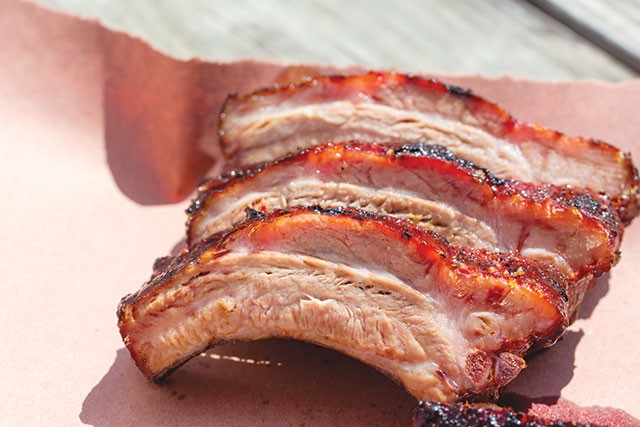 The Travels with Frenchie power trio returns again to further traverse the local hinterland in search of interesting dining experiences. As always, the culinary vice squad included Fabien Jacob, aka Frenchie (a Certified Sommelier from the Court of Master of Sommeliers), Carlos Montoya (an award-winning, evidence-based bicycle mechanic and gourmand of grilled meats) and myself, the benevolent Svengali working behind the scenes, chronicling the adventures.

For this episode, we went to the culinary hotbed known as Southtown and followed the smoke to B&D Ice House, now under new ownership and new imagination. The previous owner ran it for 50 years, but the last few years were a bit of a mystery as it was rarely open on any consistent basis and seemed more like a ghost of King William past. Steve Newman of Friendly Spot (located just across the street) is now running B&D Ice House in collaboration with celebrated chef Jason Dady and brother Jake.

Barbecue and beer is the focus now at B&D Ice House. These two items are in many ways a hallmark of San Antonio culture, starting with our German and Polish roots and somewhere along the way cross-pollinating with Tex-Mex stylings. On any given Sunday in fall, one can easily find a backyard party based on the trinity of beer, ’cue and, sadly, the Dallas Cowboys blowing a fourth quarter lead.

What this suggests is that barbecue is a food not just appreciated, but created by untold thousands every weekend. And because of this familiarity, barbecue is actually quite a challenge to get right because half the city probably consider themselves to be at least somewhat proficient with “BBQ.” Real barbecue, as in cooking with smoke, is not a fast process. It takes patience, dedication, an iron lung and time to get right.

With these thoughts in mind we arrived on a Friday for lunch. B&D Ice House has been open now for about a month and the early reports suggested both glorious home runs and soul-crushing strikeouts depending on the random moment you arrive. In addition to a new restaurant finding its legs, the nighttime dining options may have been part of the issue. They serve ’cue until it runs out, and so if they have a busy lunch rush and you show up for dinner, you might be out of luck/brisket. We made sure to show up at lunch to have full options available.

We ordered what I would consider the gold standard: brisket, ribs and sausage. The salt and pepper brisket had an amazing bark on the outside and was full of good juice and marble on the inside. To repeat, we all found the brisket to be really good and the real deal: not put through some mysterious “smoke and mirrors” process like at Bill Miller where the brisket feels as if its been fast-tracked, par-boiled and then doused with liquid smoke. Carlos found the brisket to be smoked just right and Frenchie commented extensively on the brisket’s great flavor.

The ribs were glazed with Big Red and some of that sweetness can be tasted in the final product. As with the brisket, the ribs were a big hit as well. With each bite they came off the bone with delight. I tried them with the barbecue sauce, which was vinegary and quite peppery. The sauce lingered and, for me, overpowered the sweet subtlety of the ribs, so eventually I ate them alone to better success. I did find the sauce to be a better partner with the sausage, which Carlos thought evenly savory and spicy.

We also tasted a few other items including our favorite, the green chile mac ’n’ cheese. For appetizers we tried the tortilla chips with chipotle dip, which was an interesting idea to broaden the horizon, though didn’t stand out. We did like the bacon-wrapped jalapeño poppers. Known, for some reason, as “atomic buffalo turds” in some barbecue circles, these were popular with everyone as well. These choices, complemented by the cherry Kool-Aid and the banana pudding with vanilla wafers, not to mention the mostly affordable prices, really do suggest a Sunday afternoon backyard barbecue and should make the B&D Ice House a new Southtown institution.

Newman has once again shown that he has an eye for what people want. But when I think of B&D, I see this as a sign that, along with the new Umai Mi, chef Jason Dady is rolling up his sleeves, taking a lot of interesting chances and pursuing his passion. That in itself is a home run.