Tre Trattoria at the Fairmount Hotel coming into its own 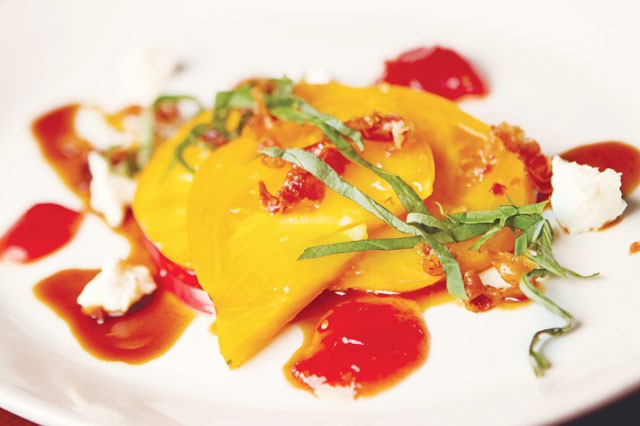 Tre Trattoria at the Fairmount Hotel

If downtown has a dining scene, hotel chefs are the vanguards. Last year, Lüke managed a graceful entry into the River Walk arena, while veterans like Las Canarias were still slogging through the recession. Now solidly in the ring is Jason Dady’s Tre Trattoria at the Fairmount Hotel. The original Tre, located in the Boardwalk Bistro near Alamo Heights and Mahncke Park, proved to be a successful formula — so much so that Dady retired his Restaurant Insignia to install a new Tre.

Six months in, Tre Trattoria’s kitchen is emerging from the shadow of the original thanks to Chef Matt Hanck’s innovations. “My biggest hope is that tourists know how to eat well,” he said. Hanck grew up in the Chicago dining scene, and wants to see San Antonio become even more of a culinary destination.

To test drive the dinner experience, my companions were three dyed-in-the-wool foodies, twentysomethings like myself known to gush about such culinary arcana as the unique flavor of tomatoes grown in volcanic ash. We first ordered a flock of antipasti, including marinated mushrooms and olives, house-cured gravlox, hand-pulled mozzarella with sea salt and toast, and still more vegetables. Asparagus with salsa rustica was crisp and fresh but not nearly as luscious as the pesto-coated cannoli beans.

Dabbed with olive oil and sprinkled with salt, the hand-pulled mozzarella was so delicious I may request it for my last meal on Earth. Equally delicious and unexpected were the roasted golden beets.

Then, two pasta dishes: The first, a spinach and almond ravioli served in broth, didn’t really excite anyone; Spaghetti Bolognese, on the other hand, was a delicate, nearly translucent house-made pasta coated in a tender mix of beef, pork, and veal — pink from the cream and not at all saucy. This is a dish you come back for again and again.

We were veering towards rainbow trout for the final main course, but the waitress encouraged us with a devotee’s zeal toward the duck confit. She explained how the duck takes 14 hours to produce from start to finish, which seemed reason enough to order it. But the meat, though perfect in texture, was almost too salty to eat. Soft inside with a perfectly browned crust, the duck legs were served over vegetables described to us as “just picked up today.” In the end I regretted not ordering the fish.

So what does Tre offer? Simplicity. It takes a deft hand to deliver the pure flavor of an espresso martini with a shred of floating lemon, or a golden beet roasted to perfection. Our waitress told us that most of the dishes we’d eaten had no more than five ingredients, many of which, like the pork and chicken, come from nearby, small farms. It turns out that Tre is as local- and seasonally minded as sustainability-themed restaurants like The Cove and Gewndolyn, but Tre doesn’t knock you unconscious with the fact. The waitstaff can rattle off the provenance of just about every dish, but the menu doesn’t boast.

After years of operation, the Tre concept has become a skillful mix of price, cuisine, and service that draws back regulars while simultaneously reeling in newcomers. If the new Tre at the Fairmount can keep that up, much more than tourists will be flocking to the historic hotel. •