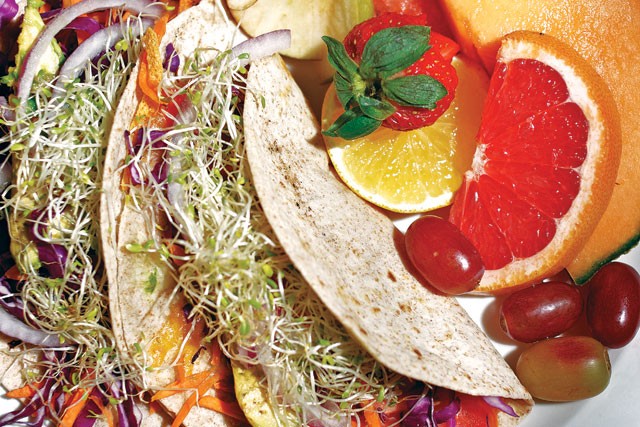 Tucked away in the land of the '09 zip code, there lays a quaint Mexican vegetarian-friendly joint called Adelante that claims to be the place "where heaven and health meet." Anxious to see if such a wholesome culinary nirvana existed here in San Anto, I popped in for dinner after a chilly scooter ride hoping to warm myself up. I kept things rudimentary and ordered the essential trifecta: a taco, enchilada, and a quesadilla. My enchilada of choice was called the Southwest Poblano, a gargantuan mound that erupted onto my plate like a volcano each time I cut into it. Strips of poblano pepper, corn, potatoes, sweet potatoes and monterey jack cheese were all stuffed into a corn tortilla topped with a chipotle ranchero sauce (tomatillo sauce is also an option) that was surprisingly fiery upon first bite, drowning out nearly everything else. The woody, warm spicy flavor of chipotle I was expecting from the sauce was MIA. Halfway through, I decided to move on to the veggie taco. In place of my usual maiz preference, I chose the whole wheat tortilla (slightly toasted) which gave a nice light crunch to the sprouts, avocado, shredded carrots, and red cabbage, tomato, and traces of red onion. Unlike my scorching enchilada, this taco was begging for some heat, so I grabbed a chip to test out the salsa (often my chief indicator of a Mexican food restaurant's skill set) before drenching my taco. It was lackluster and on the watery side, missing the flavor I was expecting. Any flavor would have been great, really. I put down the chip. After my bipolar experience, I was happy I saved the even-tempered zucchini poblano quesadilla for last. The homemade corn tortilla (folded in half) was delectable. Corn, traces of green onion, and feta cheese were refreshing and satisfying. I didn't save room for dessert, but I did save enough room to steal a bite of rice from my dinner companion's plate, only to discover it was just like the salsa: not so stellar. In a nutshell, Adelante strives to use simple techniques with fresh ingredients to create a healthy haven in a scene too often ruled over with the heavy hand of lard and extra cheese. But before Adelante can transport anyone to heaven, some of those staples need attention.