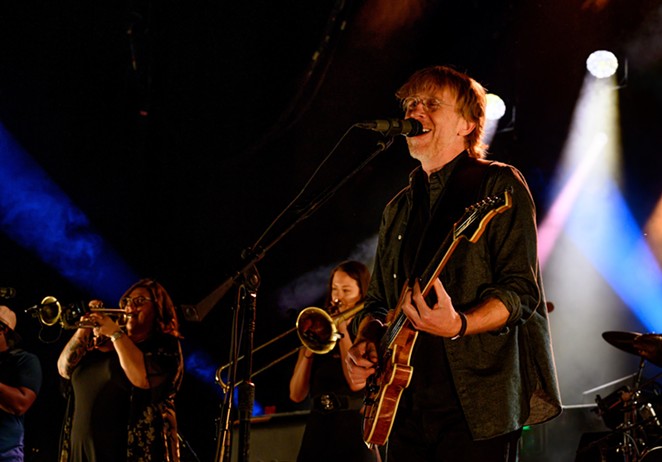 The Trey Anastasio Band, or TAB, and Phish are different animals, despite sharing a primary songwriter and huge chunks of repertoire. Phish is a four-piece and tends to keep things looser, switching keys and moods during the improvisational, psychedelic jams that are its calling card. TAB, on the other hand, is an eight-piece outfit that tends to lock into a groove and stay there, allowing Anastasio and its horn section to trade off solos while keeping the crowd dancing.

Anastasio has used his solo band — now active for more than 20 years — to showcase both new material and his arranging skills, elements in abundance on Tuesday. Having a drummer and a percussionist hold down the rhythmic foundation allowed a funky, horn-accented take on the early Phish classic “Camel Walk.” In fact, percussionist Cyro Baptista proved a stage stealer in his own right. He used not just an array of traditional percussion instruments but also employed plastic tubes and flippers(!), all the while sporting a big grin and laughing with other band members, particularly Anastasio. The joyful vibe was infectious.

Anastasio’s guitar work is steeped in the blues, he spoke that language fluently in “Alaska,” showing one of his most potent weapons in the extended solo workout: patience. While he’s noted for playing long solos, it’s less well known how he makes it work — which is playing softly and letting the room breathe before building to sustained electric shrieks.

Also of note were elements that might have been unfamiliar to the uninitiated, such as Anastasio’s arrangement skills. Anastasio was inspired by big band’s harmonic complexity in his formative years, and presented a big band take on the early '90s Phish instrumental “Magilla.” He used the fusion and world-music vibes of “Mozambique” to feature trombonist Natalie Cressman, trumpeter Jennifer Hartswick and saxophonist James Casey in quick succession. The bandleader also brought a Latin flair to another early Phish tune, “The Landlady,” rarely played by TAB and only infrequently performed as a standalone by Phish. And that’s another quirk of Phish and Anastasio. They have been described as Tolkienesque in the depth of their approach, and it is not surprising to hear fans spout off trivia about arrangements, song performances and such.

TAB doesn’t have as large of a repertoire or as storied of a history. But, it’s not entirely absent either. “Ruby Waves” was played once by TAB on October 19, 2008 and vanished. The Tobin Center show included a performance of the song, which has received a ton of play from Phish in the past year —including one version that featured a 30-minute-plus jam. After being a seemingly lost number, it was brought into action in yet another Anastasio project, Ghosts of the Forest, and now has returned to TAB’s repertoire as well. The resurfacing prompted one Phish Twitter expert to note that TAB hadn’t played the song for an astounding 4,118 days. If you think that’s the most obscure thing you’ve ever heard, well, you don’t know the world of Phish.

But Tuesday’s performance was not all big band, blues and bust outs. Presented in abundance were guitar-driven, AOR-style rock classics that have become staples for Anastasio, both with Phish and without: “Blaze On,” “Everything’s Right,” “First Tube,” “Cayman Review” and “Money, Love and Change.” The tunes’ anthemic choruses and reliable solo breaks kept the enthusiastic crowd dancing. In fact, this was likely the most energetic crowd for some time in the Tobin, as even those with seats in the balcony stood for the entire show.

As the two-set, nearly three-hour performance wound down, Anastasio closed the encore with another pensive Ghosts of the Forest number, “A Life Beyond the Dream.” That whole project continued Anastasio’s turn towards more introspective spiritual numbers, inspired by his sobriety and, in this case, the passing of a lifelong friend. Though the guitarist began his career with silly lyrics so many years ago, it feels appropriate that he ends his concerts these days on a reflective note. As he and the fanbase age — and as beloved musical celebrities seem to die every other day — we’re forced to realize that our time together is limited, and we should savor it.

Preferably with a guitar solo or two.