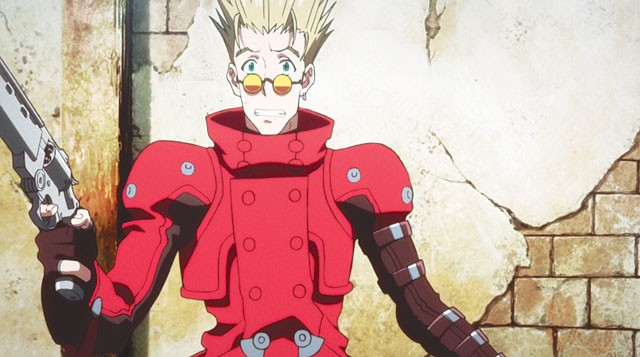 If a computer-generated kung fu-fighting panda, a scrawny cowpoke chameleon, or a jelly-bean-pooping Easter bunny haven’t impressed you this year on the feature animation front, it might be time to try something on a completely different creative plane. Something from much further east. That could’ve been a selling point for the production team behind the Japanese, manga-inspired, sci-fi western Trigun: Badlands Rumble had they been able to put out a revenge story with some imagination.

Sadly, Trigun, a film based on a comic book series written and illustrated by Yasuhiro Nightow first published in 1995, won’t be making any fans that haven’t already read the graphic novels or watched the anime TV series that spawned from the text. Trigun first aired in the U.S. on Cartoon Network in 2003. Unlike most manga films that hit the U.S. market like Pokémon and Yu-Gi-Oh!, Trigun (at least the screener I received for review) was not dubbed in English, which might split audiences faced with subtitles. Still, it’s not the voice work that will impress devoted fans of the franchise. The film’s selling points are its detailed animation and chaotic action sequences. It’s unfortunate, however, that the narrative lacks any emotional value or authentic sense of wonder.

In Trigun, Macca City is threatened when Gasback (Tsutomu Isobe), a destructive, ogre-like criminal, returns to seek revenge on the men who did him wrong during a heist 20 years ago. On his trail is redheaded female bounty hunter Amelia (Maaya Sakamoto), and Vash the Stampede (Mayasa Onosaka) AKA The Human Typhoon, a renegade outlaw whose violent history with Gasback leads them both to a good ol’ futuristic Western showdown in the center of the dusty town.

Everyone wants a piece of Gasback, who has a $300 million bounty on his head, but with his trusted bodyguard Wolfwood (Shô Hayami) and Wolfwood’s crucifix-shaped machine gun at his side, a lot of slow-motion bullets will have to be dodged before anyone reaps the vengeance they seek.

While the characters in this grimy world of Trigun are drawn with an intensity befitting the series (veiny eyes, grinding teeth, and rough edges in keeping with manga style), the central anti-hero Vash is tough to get a grip on. Part warrior, part comedian, with the complexity and annoying qualities of a Japanese Mr. Bean, Vash and the rest of his well-designed entourage don’t add much to the well-worn storyline.