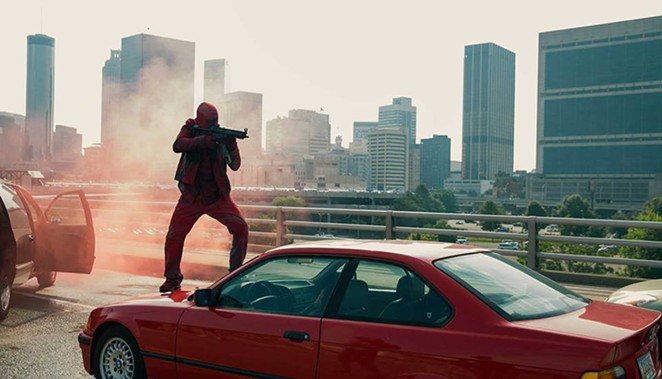 I was expecting a lot out of director John Hillcoat’s latest cinematic endeavor in Triple 9. Perhaps it was unfair to whole-heartedly believe that Triple 9 would rightfully belong to the same mythic pantheon of the Australian filmmaker’s previous works of high art: The Proposition, The Road, and Lawless. And yet, despite this film’s laundry list of A-list actors, I felt that Triple 9 was a middle of the road facsimile of the crime-ridden films of legendary director Michael Mann.

Circling around the crime-centered endeavors of a motley crew of bank robbers, Triple 9 also spends the same amount of time with the police – some crooked, some not – who are tasked with uncovering the heist’s perpetrators. With much at stake for the criminals’ enterprise, and much at stake for the authorities’ reputations, this film attempts to balance both sides of the criminal-cop interactions and opposing goals.

Triple 9 – with all its efforts hell-bent in giving the viewer a gritty, down and dirty illustration of a corrupt police force aiming to curtail the underworld masterminds looking for their next score – is a half-hearted amalgamation of recent films exploring the same narrative themes. Hillcoat’s most recent movie showcases Ocean 11’s ensemble acting and complex heists. It tries to depict the abrasive and explicit crime scenes that End of Watch did so much better. The
film’s script focuses on the slow-building cat and mouse chase between the police and the thieves, taking extra effort to paint both opposing parties as equally dishonest and equally goal-oriented, a careful characterization that, once again, worked much more effectively in Michael Mann’s Heat.

In many respects, it seems as if John Hillcoat has decided to take all his influence from Michael Mann, including Mann’s reverence for metropolitan atmospheric shots and Mann’s unflinching eye for underbelly hotspots, instead of utilizing Hillcoat’s own poetic stylings that are on full display in The Proposition and Lawless. And it’s quite okay to incorporate one’s own filmmaking influences into a work of art. Obviously, Tarantino does this effectively with all of his narratives. However, in Tarantino’s case, he always tends to include his influences and still make his movie its own unique organism. In Hillcoat’s most recent case, I feel like I am just watching a mediocre regurgitation of a Michael Mann movie from the '80s or '90s. The Australian director’s influence remains relatively unseen, which is a travesty for the fans of his past movies.

But despite its muddled execution, Triple 9 does hold some discreet delights. Kate Winslet’s performance as an enigmatic Russian Jewish kingpin stands out as a machismo character she has yet to play onscreen. Clifton Collins Jr., one of my favorite character actors of our time, delivers another point-on, multi-dimensional portrayal of a conflicted cop on the take. Emmy winner Aaron Paul pulls out another effective performance, although due to his onscreen freebasing, it feels like he’s just reliving an updated version of Jesse Pinkman. This ensemble drama is loaded with ten acting Oscar nominations (and one Oscar win) and two Emmy nominations (and three Emmy wins). However, with so much talent involved, the overall narrative underuses its actors’ strengths, making for homogenized onscreen portrayals, save for Winslet’s dynamic and intimidating persona.

For fans of director John Hillcoat, I would advise that Triple 9 is not up to snuff in regards to his previous films which emanated a poetic mythos, wherein the director’s stylized point of view is visually evident. And although the screen is laced with Oscar nominated actors, the stretched-out ensemble aspect of the script doesn’t allow for any of the actors to leave a lasting iconic impression. For those who aren’t familiar with John Hillcoat’s work, you may be fine with spending money to view Hillcoat’s latest endeavor, but his onscreen efforts simply boil down to being a sub-standard paragon of director Michael Mann’s seminal, crime-based works of the '80s and '90s.