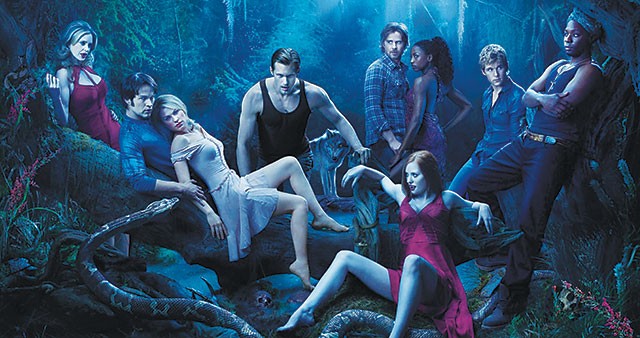 “Bill, this isn’t you,” she says as he holds the vile of sacred blood. “What the fuck do you know about me?” he responds.

Ushering in religious overtones and the damnation of one’s soul, human or vampire, Season five of HBO’s horror-drama True Blood ended with the blood-soaked reincarnation of Bill (Stephen Moyer). Calculating and manipulative, he appears to have been playing the long con on everyone in Bon Temps and beyond.

The series returns for its sixth season in the wake of chaos. The Authority is in disrepair and True Blood has gone scarce. With the addition of a new vampire god to the mix, the new season is sure to be a doozy.

Season opener, “Who Are You, Really?” delivers the suspense, mystery, gore, and humor associated with the series. Sookie (Anna Paquin) and co. are on the run to escape the Authority compound. Meanwhile, growing series standout Alcide (Joe Manganiello) has finally found his footing, taking over the role of pack leader. It doesn’t take long for the wolf of women’s dreams to realize there are unsavory sides to the job, but never a lack of benefits.

Though critical interest in the series has waned and Game of Thrones has taken over as the banner program for the premium channel, ratings have held strong, continuing to average nearly five million viewers. Season six also marks the next era of True Blood with Alan Ball’s departure from showrunner duties last year to pursue his latest Cinemax effort, Banshee.

The series has recently found itself plagued by a lack of focus and drive. A show that once tore through episodes with story and action is now much more contemplative in nature and exhaustive in plot. Secondary characters have been brought to the forefront too often with their own dedicated storylines, creating a snowball effect of needless follow-up and pacing issues with subsequent episodes.

True Blood: The Complete Fifth Season (Blu-ray/DVD/Digital Download) is available now on HBO Home Video, and 13 True Blood cast members will kick off the new season with HBO’s first-ever live broadcast from the set of Fangtasia. The two-part social media event begins at 9 a.m. on June 16 via the True Blood profiles on Facebook, Twitter, Instagram, and Vine.