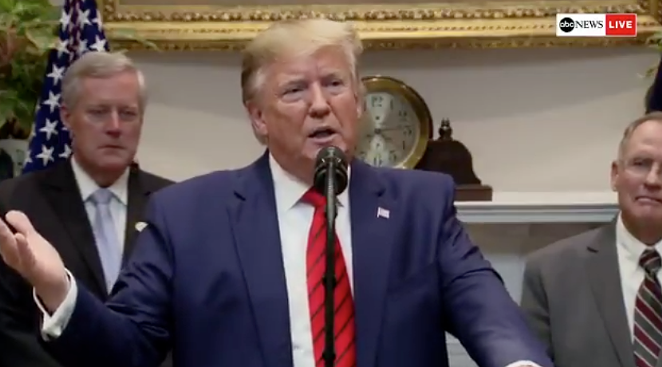 After Spurs coach Gregg Popovich and former Spur Steve Kerr voiced their opinions about the NBA's recent controversy with China, President Donald Trump had some choice words for them.

On Tuesday, Popovich defended NBA commissioner Adam Silver for how he responded to the controversy, putting free speech above business matters. Former Spur and now Golden State Warriors coach Steve Kerr said he wanted to educate himself more before speaking on the matter.

That didn't stop Trump from setting in on Kerr, calling him a "little boy" during a press conference.

"I watched this guy, Steve Kerr, and he was like a little boy who was so scared to be even answering the question," Trump told reporters Wednesday. "And yet he'll talk about the United States very badly."

He wasn't so tough on Popovich, a frequent critic of the president.

"Sort of the same thing, but he didn't look quite as scared, actually," Trump said.

President Trump criticizes Steve Kerr and Gregg Popovich — both vocal critics of Trump — when asked about China putting pressure on the NBA: "They talk badly about the United States, but when it talks about China, they don't want to say anything bad" https://t.co/rR2dKOelYD pic.twitter.com/am9hMQcGG3

His criticism of the coaches was the first time he's commented on the controversy, which began after Houston Rockers general manager Daryl Morey tweeted his support of pro-democracy demonstrations Hong Kong. Morey has since deleted a tweet that echoed the sentiment of "stand with Hong Kong."

In light of Morey's actions, the NBA's official Chinese partners have suspended ties with the league.

"They talk so badly about the United States, but when it talks about China, they don't want to say anything bad," Trump said of the NBA. "I thought it was pretty sad, actually."

As Trump has done recently with other critics, he questioned Kerr's and Popovich's loyalty to the United States.

"I watched the way that Kerr, Popovich and some of the others were pandering to China, and yet to our own country, they don't," he said. "It's like they don't respect it."