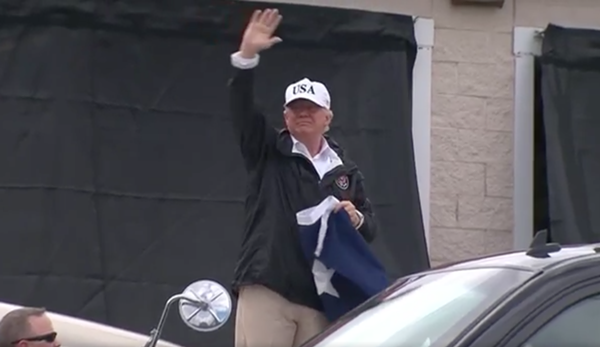 President Donald Trump and First Lady Melania Trump’s two-city trip to Texas for briefings on Hurricane Harvey began in Corpus Christi on Tuesday morning, when they hopped off Air Force One clad in “U.S.A” and “FLOTUS” ball caps.


The pair met with Governor Greg Abbott, FEMA Administrator William "Brock" Long, and other state officials and members of the president’s cabinet, including Senators Ted Cruz and John Cornyn and U.S. Secretary of Housing and Urban Development Ben Carson.

“It’s a real team. We wanna do it better than ever before,” Trump said, referring to disaster relief efforts, without going into specifics. “We want to be looked at in five years, in ten years from now, as this is the way to do it.”


Trump, who mentioned Abbott had been his friend for a long time, told Abbott it had been an honor to work with him and his team.


“We won’t say congratulations, we don’t wanna do that. We’ll congratulate each other when it’s all finished, but you have been terrific,” Trump told Abbott during the briefing.

After the briefing, Trump spoke to a crowd of a hundred or so people waiting to see him. It is unclear if the audience of supporters showed up spontaneously, or if they had been organized prior to Trump's speech.


"What a crowd, what a turnout!" Trump said.

He failed to mention or acknowledge the 15 casualties, tens of thousands of displaced people, or irreversible damage as a result of the hurricane. Instead, his lax messaging alternated between commending state officials for their handling of the situation, and reassuring Texans things would be OK soon (contradicting what state and local officials have said thus far about a long road to recovery).

Earlier this week, FEMA administrator William Brock Long told the Washington Post Harvey would "probably be the worst disaster the state's seen." Abbott warned Texans on Monday that they shouldn't expect a quick recovery, but rather that Texans need to recognize it will be "a new and different normal for this entire region."


"Texans can handle anything," Trump said to the crowd.

Trump then traveled to Austin, where he was met with approximately 200 anti-Trump protesters and a couple dozen supporters, by one reporter's count.

Immigrant rights activists were among the protesters waiting for Trump to arrive outside the Department of Public Safety building to protest the potential repeal of Deferred Action for Childhood Arrivals (DACA). Trump is expected to decide whether or not to end DACA by September 5.

He addressed a room of DPS employees prior to entering the briefing room, calling the storm an "epic, historic monster." He said the coordination between Abbott and FEMA and Texas officials had been "beautiful to watch."

But, aside from compliments and eerily cheerful messages, Trump said little about a concrete plan moving forward for the thousands of Texans who have been affected by Harvey.

Perhaps he's sticking with the message he gave Texans Friday, before the storm hit: "Good luck!"