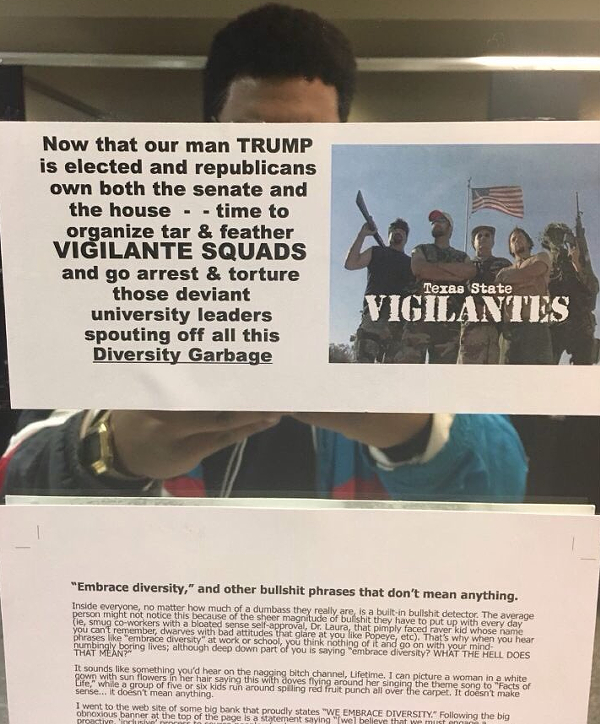 On Wednesday afternoon, fliers threatening to "arrest & torture" people who support diversity surfaced around Texas State University. The fliers appear to be the work of Trump supporters who are calling themselves the "Texas State Vigilantes" — a group of five guys dressed in camo, armed with a shotgun and rifle.

According to the Austin American-Statesman, university police confirmed they are investigating reports of the flier, which calls for "tar & feather vigilante squads" to roundup and torture "deviant" people on campus "spouting off all this Diversity Garbage."

While TSU President Denise M. Trauth sent out an email to students, faculty and staff around 6 p.m. Wednesday, the message completely failed to acknowledge the hateful threats seen around campus.  In her email, Trauth merely writes that "constructive dialogue" is the key to strengthening the university community:

Our country has been through one its most contentious presidential elections ever, and people of all backgrounds are experiencing different emotions.

We know that those who are a part of our university community have different opinions and that, in this time of transition in our national leadership, members of our community are expressing their thoughts and concerns. Discourse is fundamental to the academic enterprise, and this university strives to protect it.

As Bobcats our aim should be to better understand that which causes divisions among us and to work toward strengthening our bond as a university community. Constructive dialogue is the best way to achieve this goal.

Meanwhile, a peaceful protest against Trumps' election is set to meet at 5 p.m. Saturday, Nov. 12 at The Square in San Marcos. On the event's Facebook page, organizers write, "We must immediately begin fighting against his hatred. We must build a movement to fight racism, sexism, homophobia, and Islamophobia! In this time of defeat we must pick ourselves up and build bridges, not walls."